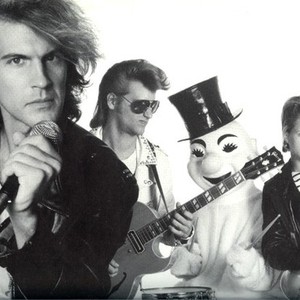 Men Without Hats is a Canadian alternative / Synthpop group from Montreal, Quebec, Canada formed in 1977 who were popular in the 80s. They were characterized by the deep, expressive vocals of their lead singer Ivan and their elaborate use of synthesizers and electronic processing. Men Without Hats were always, at the core, Ivan Doroschuk (also released solo as Ivan) and his brother Stefan Doroschuk, with various other members, including a third brother, Colin Doroschuk, as well as Jeremy Arrobas, tracy howe, Roman Martyn and Allan McCarthy.

Emerged in the early 1980s with an EP called Folk of The 80s (1980), but erupted onto the international scene a couple of years later with their hit single "The Safety Dance" (from Rhythm of Youth). The band lasted as such into the early 90s and released four more albums.

Reshuffling the line-up again, the band released the album Pop Goes the World in 1987 with Ivan, Stefan and Lenny Pinkas. The album's title track reached #20 on the Billboard Hot 100, #2 on the Canadian Singles Chart, and was #1 in Austria. The song was also featured in the 1987 film Date with an Angel and became the fifteenth biggest selling single in South Africa for 1988. The touring band added Bruce Murphy on keyboards and guitar, Marika Tjelios on bass, Richard Sampson on drums, and Heidi Garcia on vocals and keyboards.

Their next album, The Adventures of Women & Men Without Hate in the 21st Century, released in 1989, featured a cover of ABBA's song "SOS". The musicians on the album were essentially the touring band from Pop Goes the World. Their 1991 album Sideways, dominated by processed electric guitars instead of keyboards, revealed a dramatically different sound for the band due to synthpop falling out of style.[citation needed] The album failed to attract an American label, despite the group's efforts to convince their own record label. Soon after this career setback, the band officially disbanded, although Ivan Doroschuk and keyboardist Bruce Murphy would record several demos in 1993, for a concept album tentatively titled 'UFO's are Real', which was never released.


After a few years Ivan returned solo with the album The Spell in 2000 and in 2003 returned to the MWOH moniker and the self released album No Hats Beyond This Point.

On September 24, 2010, Ivan reformed Men Without Hats, with three hired backup musicians, and appeared at the Rifflandia Music Festival in Victoria, British Columbia, performing ten songs from the Men Without Hats back catalogue. The Ivan-fronted band (described by the Austin American-Statesman as "simply singer Ivan Doroschuk and some hired guns" and by Stefan as a "tribute band"[4]) began the "Dance If You Want Tour 2011" with a well attended and positively received performance at Austin's South by Southwest event in March, 2011. At the North by Northeast festival in Toronto on June 18, Ivan announced that Men Without Hats would be releasing a new studio album, and that it would be entitled "Folk of the 80s: Part IV". On June 19, 2011 he played at the Festival "Sound of Music" in Burlington, Ontario, Canada. Stefan has announced his intention to continue working separately, also under the Men Without Hats name.[citation needed] On March 6, 2012, the band announced via Facebook that their album would be called Love in the Age of War and be released in May of that year.

On 22 April 2012 Men Without Hats released the new single "Head Above Water" from the forthcoming album "Love in the Age of War" said to be out on 22nd May.

Love In The Age Of War

No Hats Beyond This Point