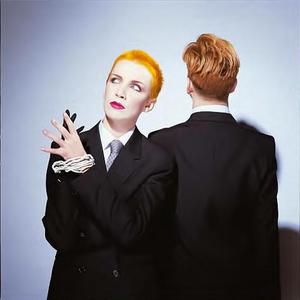 Eurythmics were a Pop Rock duo from the United Kingdom, currently disbanded, but known to reunite from time to time. Consisting of musician/producer David A. Stewart (often referred to as Dave Stewart) and songwriter/vocalist Annie Lennox, they formed in 1980 after the breakup of their former band The Tourists. Best known for their 1982 album and single Sweet Dreams (Are Made Of This) and their striking visual image, most notably Lennox's androgynous persona.

They have described their music style as "for intelligent dancers". Both Stewart and Lennox have had success outside of Eurythmics. They have sold over 75 million albums worldwide. Eurythmics originally came together in 1980 and disbanded in 1990. They reunited in 1999 and split again in 2005.

After a Krautrock-inspired debut, their second and third albums were firmly in the electronic avant garde - as befitting their striking visual style. Though Touch and Sweet Dreams sold to gold/platinum on the strength of the song "Sweet Dreams". Their fourth album (not counting the soundtrack 1984) Be Yourself Tonight went double platinum and planted them firmly in the (synth) pop genre. From this album came several singles, but ironically the single lingering on play lists and on peoples minds is their avant garde single "Sweet Dreams".

Stewart was once married to former Bananarama and Shakespear's Sister member Siobhan Fahey.

In the 70s Lennox and Stewart were a couple.

For more details on the Eurythmics, visit the fan site:
http://www.eurythmics.me.uk/

Boxed: We Too Are One (Remastered + Expanded) CD7

Boxed: Sweet Dreams (Are Made Of This) (Remastered + Expanded) CD2