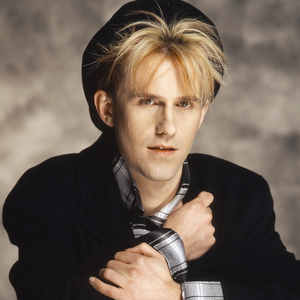 There are three persons with this name. 1. Howard Jones (born John Howard Jones on February 23, 1955) is an English singer and songwriter. He is the eldest of three boys. His birthplace is Southampton, England, and he spent his early years in High Wycombe in Buckinghamshire, and attended the Royal Grammar School. He now lives with his family in Somerset, England. When he was young, he used to give piano lessons. One of his clients was a girl named Jan Smith, who he later married. Whilst working with her, a vehicle crashed into their van, injuring Jan.

He is the eldest of three boys. His birthplace is Southampton, England, and he spent his early years in High Wycombe in Buckinghamshire, and attended the Royal Grammar School. He now lives with his family in Somerset, England.

When he was young, he used to give piano lessons. One of his clients was a girl named Jan Smith, who he later married. Whilst working with her, a vehicle crashed into their van, injuring Jan. She claimed compensation and used the money to buy Howard a synthesiser, Moog Prodigy. The shop delivered two by mistake, and Howard liked the combination of the two so much that he paid for the extra one.

He hit the charts in 1983 with a song called "New Song," which made it into the UK top ten. Speaking with Songfacts, Jones explained the song is his manifesto, and why he wanted to get in the music business and write songs to begin with. Said Jones: "I was working in the factory at the time - I was doing the gigs at night and I was working in the factory. And I wanted to say to people, 'You can. It is possible to do what you really want to do if you've got enough guts and determination. You can do what you're really good at in this life if you set your mind to it.' And so really that's what that song's about. It's about letting go of fear and seeing both sides of an argument and throwing off the things that hold you back mentally."

Jones subsequently had three more hits over the next twelve months and a UK Number 1 album, Human's Lib. He acquired a hardcore fanbase made up of both starstruck teenagers and more mature music lovers, who saw the musicianship which went into the electronic sounds of his songs. His mother ran his fan club. Jones was a close temporal and stylistic contemporary of Nik Kershaw, and the two musicians were often conflated in the affections of the contemporary pop audience.

Howard was known as a respectable face of pop, combining innovative synthesiser music with strong feelings on animal rights and life's excesses. In his early days, he performed with a mime artist called Jed Hoile, who used to do improvised choreography while doused in white paint as Howard played behind him.

In the summer of 1984, he released a single called "Like To Get To Know You Well", which he said was 'dedicated to the original spirit of the Olympic Games'. Although it wasn't an official Olympic anthem for the Games in Los Angeles that summer, it caught on and was a huge worldwide hit. The sleeve featured the song title in ten different languages; while Howard sang the title line in French and German on the extended version. The song appeared in the film Better Off Dead.

Howard's second album was a ground breaking 'remix' album. It contained six songs, all but one of which had been previously released, but which appeared in elongated formats, including the multi-lingual version of "Like To Get To Know You Well". The album was called The 12 Inch Album and the sleeve featured a miniature Howard standing next to a 12-inch ruler.

When he released his second studio album, Dream Into Action, in 1985, he introduced his own backing band, including future Soul II Soul singer Caron Wheeler as one third of female backing vocal trio Afrodiziak. Playing bass guitar, meanwhile, was Howard's own brother Martin, who had to have an extra string added to his instrument to play some of Howard's bass lines, which were originally played on a keyboard without regard for the range of a real bass guitar. One of the singles released from this album, "No One Is To Blame", was later re-recorded and featured Phil Collins as drummer and producer.

In July 1985, Howard performed at Wembley Stadium as part of the Live Aid concert, singing his 1984 hit "Hide And Seek" while playing a piano belonging to Freddie Mercury.

Howard had his last UK Top 40 hit in 1986 and thereafter concentrated on production, songwriting and running a successful vegetarian restaurant, though he had Billboard Top 10 success in the States in the 1990s. His eldest son, Ois?n (pronounced Osheen), was born in 1985 and is now an actor.

In 2005, he competed on the American TV show Hit Me Baby One More Time, losing to Irene Cara. Although he lost the in-studio vote to Cara, he won the online poll vote.

2. Howard Jones is the current lead singer of American metalcore bands Killswitch Engage and Blood Has Been Shed.

Jones resides in Connecticut. His first success was in Connecticut with the band Blood Has Been Shed. After the release of The Novella of Uriel, the band went on tour, but Jones was eventually approached for a bigger project. Howard Jones replaced the lead singer of Killswitch Engage, Jesse Leach, in July of 2002, shortly after the release of Alive or Just Breathing, Killswitch Engage's Roadrunner Records debut album.

Meanwhile, Blood Has Been Shed released their third album, Spirals in 2003. Critical reviews were mixed, with some saying the album was a bit stray from the music found on I Dwell and Novella, while fans found it to be the band's most sonically-challenging album yet.

The first time KSE fans heard Jones they were impressed by him. Later he would be heard on the song "When Darkness Falls", which was first released on the soundtrack for the movie Freddy vs. Jason. Finally, Killswitch Engage released their first album with Jones as the new singer, as well as Blood Has Been Shed drummer Justin Foley. The End of Heartache would spawn two successful singles, "Rose of Sharyn" and the Grammy-nominated title track, "The End of Heartache". There was a minor spot of controversy with some fans over the Grammy nomination, as the song that was picked was a remixed version that would eventually appear on the Resident Evil: Apocalypse soundtrack. The differences between the original recording and the remixed version are the fact that the song is sung in a traditional singing style rather than using the original scream track that appears on the album, and several sections of the song have been shortened for a more commercially dynamic vision.

In November 2006, Killswitch Engage released their fourth album (and second with Howard Jones) entitled As Daylight Dies. The album has spawned the singles "My Curse" and "Arms of Sorrow", and it has been cited by the band through numerous interviews that the album recalls influences from bands in the NOLA music scene, as well as metal bands like Pantera and Machine Head.

Despite his front man role in Killswitch Engage, Jones is still the lead singer for Blood Has Been Shed.

Aside from singing, Jones has also taken on the role of a manager to new and upcoming artists. Currently, he manages two bands, Twelve Tribes, Mikoto, and also the producer Zeuss.

He is also known for his vocal styles, which include deep, booming roars, a higher, raspier scream, and operatic clean vocals. The clean style is absent from most of his work with Blood Has Been Shed, however, with Killswitch Engage, he usually makes use of all of his vocal styles in almost every song, particularly in As Daylight Dies and Holy Diver.

3. Howard Jones is an English folk singer and musician. He was a member of The Electropathics and currently performs with Albireo and as a solo performer.

One To One - Cross That Line - In The Running CD5