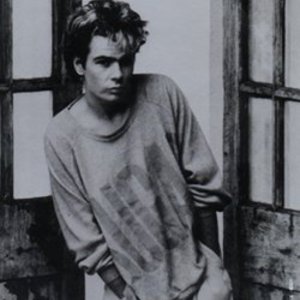 Born Nicholas David Kershaw in Bristol, England on March 1, 1958, Kershaw played guitar and sang in a number of underground bands before deciding on a career as a songwriter. However, he ended up performing his own songs rather than giving them to others, and signed a deal with MCA Records in 1983, which spawned a debut single, "I Won't Let The Sun Go Down On Me", which just missed out on the UK Top 40.

At the beginning of 1984, he made his breakthrough when "Wouldn't It Be Good", featuring a video of Kershaw as a chromakey-suited alien, reached Number 4 in the UK charts. He enjoyed three more Top 20 hits from debut album Human Racing , including the title track and a successful re-issue of his debut single, which ultimately proved his biggest hit as a performer when it got to Number 2 in the UK.

Despite winning awards, attracting admirers for his writing such as Elton John & Eric Clapton. He gainied a huge teenage fanbase, Kershaw was not without his critics. Some complained that he did too much onstage when he had a competent backing band called the Krew to play all the required guitar and keyboard parts of his songs. Others derided his fashion sense (Kershaw made the snood and fingerless gloves into vital sartorial requirements in 1984) and some claimed he was, vocally, trying to sound like Stevie Wonder. Others made personal attacks; for example. Nik, today is known as one of the best ever songwriters.

Kershaw, who was married to long-time love and backing singer Sheri, then released a single called "The Riddle", which would send fans, journalists and linguists into overdrive, as each tried to establish what the meaning was behind the strange set of circumstances and clues which Kershaw put in the verses and chorus. Another major hit, it was also the title track of his second album, which also spawned two more UK Top 10 hits, "Wide Boy" and "Don Quixote".

In July 1985 Kershaw was among performers at Live Aid, Wembley Stadium. His star began to wane soon afterwards and he enjoyed only one more UK Top 40 hit. He continued to make and release records, and perform on other people's records. His prowess as a songwriter served him well in 1991 when his song The One And Only, appeared on the soundtrack to the Brittish movie Buddy's Song and in the American film "Doc Hollywood", and provided a UK Number 1 single for the star of the film, Chesney Hawkes (son of the Tremeloes' Chip Hawkes). In 1993 The Hollies had a minor hit with another of his songs, The Woman I Love.

In the 2000s, the onset of 1980s nostalgia brought Kershaw back into the public eye to discuss the heights of his career and it was at this point that he revealed that "The Riddle" meant, in fact, nothing. He just threw a collection of random lines together in haste after persuasion from others in the recording studio, having initially just intended to arrange and record the piece as an instrumental. He added that he could not say anything at the time because he was receiving thousands of essays and theses on the song, establishing what "The Riddle" meant and stood for, and what the answer was, and he did not want to disappoint people.

1999 saw the release of 15 Minutes, a collection of songs that are generally more personal and mature, and that he could not envisage being recorded by other artists. Both this and the more commercial To Be Frank (2001) are stylistically different from his earlier work by being underpinned by acoustic guitar rather than synthesiser.

A new album by Nik was released late in 2006. Entitled "You've Got To Laugh" it is sold via his website, and online via the iTunes Music Store. For more information visit the official site at http://www.nikkershaw.net

You've Got To Laugh