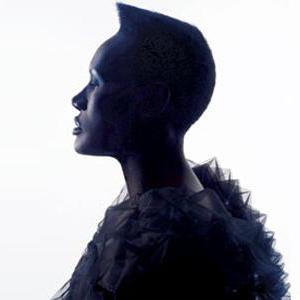 Grace Jones (born Grace Mendoza on May 19, 1948, in Spanish Town, Jamaica) is a model, singer and actress. Raised in Syracuse, New York, she found success in the 70s as a model, working in New York and Paris (where she shared an apartment with Jerry Hall and Jessica Lange), before rising to public prominence as a singer and personality. Jones secured a record deal with Island Records, which resulted in a string of club hits.

Raised in Syracuse, New York, she found success in the 70s as a model, working in New York and Paris (where she shared an apartment with Jerry Hall and Jessica Lange), before rising to public prominence as a singer and personality.

Jones secured a record deal with Island Records, which resulted in a string of club hits. The three disco albums she recorded - Portfolio (1977), Fame (1978), and Muse (1979) - generated dance singles such as Sorry/That's The Trouble, I Need A Man, and a classic cover of La vie en rose. During this period, she also became a muse to Andy Warhol, appearing in his portraits and accompanying him to Studio 54 on many occasions.

As the 70s drew to a close, Jones adapted the emerging new wave music to suit a different style, a significant departure from her previous output that resulted in some of her strongest work. Still with Island, and now working with producers Alex Sadkin and Chris Blackwell at Compass Point Studios, and with the considerable talents of Sly Dunbar and Robbie Shakespeare (Sly & Robbie) behind her, she released the acclaimed Warm Leatherette (1980) and Nightclubbing (1981). These included re-imaginings of songs by Sting, Iggy Pop, The Pretenders, Roxy Music, Flash and the Pan, The Normal, and Tom Petty, as well as originals like the innuendo-filled Pull Up To The Bumper and the haunting I've Seen That Face Before (Libertango). Parallel to her musical shift was an equally dramatic visual departure; Jones - working heavily with style artist Jean-Paul Goude - adopted a severe, androgynous look that enhanced her already striking presence, the iconic cover of Nightclubbing exemplifying this new identity. Her collaboration with Sadkin and Blackwell continued with the dub reggae-influenced album Living My Life, which featured Nipple To The Bottle, The Apple Stretching, and the Jones-penned and much-sampled My Jamaican Guy.

Later in the 80s, she worked with Trevor Horn for the conceptual musical collage Slave to the Rhythm (1985), and with Nile Rodgers for Inside Story (1986) - her first album away from the Island label. Inside Story produced her last US Hot 100 hit to date, I'm Not Perfect (But I'm Perfect For You), while Bulletproof Heart in 1989 produced the #1 US club hit Love on Top of Love - Killer Kiss, produced by C+C Music Factory's David Cole and Robert Clivilles. Though a chart regular in the UK Grace Jones never achieved mainstream musical success in the US, but most of her singles became huge hits in the dance underground.

Jones' strong visual presence was extended to her stage work. Her performances were unique spectacles as she adopted various personas and wore outlandish costumes throughout, particularly during her years with Goude. Her most memorable performances include the Paradise Garage in 1985, wherein she collaborated with legendary visual artist Keith haring for her costume and the extraordinary One Man Show filmed in Drury Lane Theatre London and in New York and released on video in 1982 (it is yet to be re-released).

In 2008 she returned with the album "Hurricane".