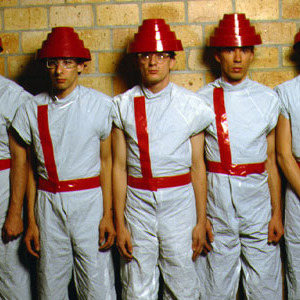 Devo is an American rock group formed in Akron, Ohio, United States in 1972. The band split in 1991 and returned in 1996. The band currently consists of Gerald Casale (vocals, bass), Mark Mothersbaugh (vocals, synthesizer), Bob Mothersbaugh (guitar), Bob Casale (guitar, keyboards) and Josh Freese (drums). The band released their first album in 20 years, "Something for Everybody" on June 15, 2010.

Their style has been variously classified as punk, industrial and rock, but are most often considered to be the 70s/early 80s New Wave band that ushered in the synth pop of the 1980s, along with other acts such as Gary Numan and The B-52s.

Their work has proved hugely influential on subsequent popular music, particularly New Wave, alternative and grunge music, they created some memorable music videos popular in the early days of MTV.
The name "Devo" comes from the concept of Devolution (also referred to by the band as "de-evolution"). This idea was developed as a joke by Kent State University art students Gerald Casale and Bob Lewis as early as the late 1960s. Casale and Lewis created a number of art pieces in the vein of Devolution. At this time, Casale had also performed with the local band 15-60-75. They met Mark Mothersbaugh around 1970, who introduced them to the pamphlet Jocko Homo Heavenbound, which would later inspire the song "Jocko Homo".

The pivotal moment for the formation of Devo was the Kent State shootings of May 4 1970. Casale knew two of the murdered students, and even saw one student, Allison Krause, with exit wounds from the M1 Garand rifle. At this moment, Casale claims he changed the idea of Devolution into a serious concept.

The first form of Devo was the "Sextet Devo" which performed at the 1973 Kent State performing arts festival. It included Casale, Lewis and Mothersbaugh, as well as Gerald's brother Bob Casale on guitar, and friends Rod Reisman and Fred Weber on drums and vocals, respectively. This performance was filmed and a part was included on the home video The Complete Truth About De-evolution. This lineup only performed once. Devo returned to perform in the Student Governance Center (featured prominently in the film) at the 1974 Creative Arts Festival with a line-up including the Casale brothers, Bob Lewis, Mark Mothersbaugh, and Jim Mothersbaugh on drums.

Devo later formed as a quartet focusing around Mark Mothersbaugh and Gerald Casale. They recruited Mark's brothers Bob Mothersbaugh and Jim Mothersbaugh. Bob played electric guitar, and Jim provided percussion using a set of homemade electronic drums. This lineup of Devo lasted until 1976 when Jim left the band. The lineup was occasionally fluid, and Bob Lewis would sometimes play guitar during this period. In concert, Devo would often perform in the guise of theatrical characters, such as Booji Boy, and The Chinaman. Live concerts from this period were often confrontational, and would remain so until 1977. A recording of an early Devo performance from 1975 with the quartet lineup appears on DEVO Live: The Mongoloid Years, ending with the promoters unplugging Devo's equipment.

Devo will embark on a Euro-Tour 2007 on June 16th in Barcelona. They will perform concerts in Brighton, London, Manchester and Glasgow. For more info about the tour, click on the following link - http://www.noblepr.co.uk/Press_Releases/3a/devo.htm

Something Else For Everybody