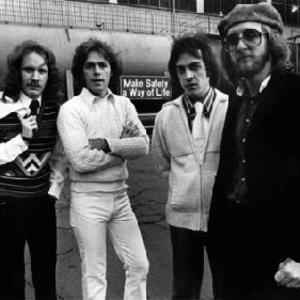 Crack the Sky is a 1970s band from Steubenville, Ohio (later adopted by Baltimore area radio) which released several minor-hit albums. Their self-titled debut garnered the "Album of the Year" award from Rolling Stone magazine. Unfortunately, Crack the Sky remained a regional phenomenon, especially in the Baltimore area. Since dissolving around 1980, lead singer John Palumbo has continued releasing albums under the "Crack the Sky" moniker. History 1970s

Crack the Sky traces its roots to an early seventies band called ArcAngel,[1] which featured John Palumbo, on vocals and Rick Witkowski on guitar. The two had auditioned for Terry Minogue, a nephew of Terry Cashman of CashWest Productions. Minogue convinced CashWest to give them a development deal so they could get a band together and record demos. Minogue later said, "They played some of the most beautiful music I ever heard in my life."[1]ArcAngel, initially a 10 piece band, sized down to five core members. In addition to Palumbo and Witkowski, there was Joey D'Amico on drums, Joe Macre on bass, and Jim Griffiths on guitar, completing the first incarnation of Crack the Sky. CashWest Productions started Lifesong Records, and Crack the Sky would be the first band to release an album on that label.

In 1975, the band released their critically acclaimed first album, the eponymous Crack the Sky, which reached 161 on the Billboard chart. Although praised by The New York Times and declared the "debut album of the year" by Rolling Stone Magazine, promotion and distribution problems on Lifesong Records' behalf prevented its widespread success.[1]According to Terry Minogue, "Records were promised but never arrived at the distribution centers. The record would be on the radio but there would be no product on the stores or visa versa. When people wanted it, it would never be available."[1]By blind luck, the marketing did work in Baltimore, only because a surplus of records were shipped there and put on display in stores when the album was receiving radio play. Subsequently, the album became a monster hit in Baltimore. Laidback Larry Allen, music director at WYDD in Pittsburgh, loved the record and played the debut in heavy rotation, but no other place.

Animal Notes, the band's second album, was originally intended to be written as a rock opera about the Royal Canadian Mounted Police, but the concept was shrunken down to one of the songs, "Rangers at Midnight". Like the band's debut release, it was critically acclaimed, reaching 142 on the Billboard chart, performing better than their first album. This time, the high concept and lack of "radio singles", due to the band's disdain for commercial music, contributed to lack of sales. The song "We Want Mine" was a slam at Lifesong Records for royalty withholdings.

By this point, Crack the Sky had finished two cross-country tours and had opened for Styx, Supertramp, Rush, Foreigner, The Electric Light Orchestra, Yes, ZZ Top, Kansas, Edgar Winter, Frank Zappa, and Boston. They were thrown off tours with Kansas, Styx, and ELO because they outplayed all of them as the opening act.[1]

As a result of a breakdown in communications with their record label, and a divergence in creative approaches, Palumbo left the band in 1977 to pursue a solo career. The remaining band members, with new vocalist Gary Lee Chappell and Pittsburgh keyboardist Vince DePaul, released Safety in Numbers in 1978. Safety in Numbers reached 126 on the Billboard chart, their highest charting album to date. In addition, the live album Live Sky was released by this lineup of the band. Later that year, Rolling Stone Record Guide compared Crack the Sky to Steely Dan.

Due to contractual locks with Lifesong, combined with their chief song writer and front man no longer with them, members of Crack the Sky felt they had no other choice but to disband, and Classic Crack, a greatest hits compilation, was released by Lifesong in 1980.
[edit] 1980s

In 1980, Palumbo reunited with Witkowski and keyboardist Vince DePaul to release White Music. This record featured a number of the "singles-quality" songs that had earlier proved elusive to the band, including "All American Boy", "Skin Deep", "Techni Generation", and "Hot Razors in My Heart." "Techni Generation" saw small airplay in the Pittsburgh area during this time.

Witkowski, Macre & D'Amico went back to the Pittsburgh area to work with the vocalist/songwriter Bill Taylor and formed the B.E. Taylor Group. They released an independent 12" EP and eventually signed to MCA records for 2 full length LP's: "Innermission" and "Love Won The Fight". The group's catchy single release of "Vitamin L" (written by Witkowski and from "Love Won The Fight", found its way into Billboard's Top 100 charts and gained massive national airplay. This led to being signed to CBS Records; recording & releasing "Our World".

Palumbo reformed Crack The Sky once again in 1981 with DePaul, Carey Ziegler, Michael Taylor and John Tracey, and produced Photoflamingo. This release, and subsequent efforts including World in Motion 1 and The End, failed to garner the critical and public acclaim of the earlier releases, and the group disbanded again in 1983. A notable song from this era is "All Fly Away", about the fears of nuclear holocaust.

Palumbo released the studio album Raw in 1986. Although the album has the signature Crack the Sky sound and feel to it, it featured no past members of the band besides Palumbo (guitarist Jamie LaRitz is the only other musician credited).

Palumbo reunited Crack the Sky with Witkowski, DePaul, Ziegler, and D'Amico for a series of live shows in 1986 at the Baltimore club Hammerjack's. Between then and 1989 this band performed a number of shows in the Baltimore area, including Painters Mill Music Fair.

In 1988, Palumbo joined with Witkowski, DePaul and D'Amico to produce From the Greenhouse, in many ways a return to the band's classic sound, with solid efforts including the title track and the song "Lost In America". The album peaked at 186 on the Billboard chart, and received a mixed review from People Magazine[1]. During this time, this lineup performed occasionally in the Baltimore area with Ziegler joining on bass.
[edit] 1990s

Crack the Sky released Dog City in 1990. The period between then and 1996 saw little activity except for the release of the compilation disc Rare! in 1994. During this time, Witkowski composed music for a number of game shows on the children's television network Nickelodeon, including Guts and Figure It Out.

Palumbo gathered the band together again in 1996 beginning a series of live shows at small venues in the Baltimore area. The band at this time featured the same lineup as 1993's The End, with the addition of Nat Kerr on keyboards. A new studio album, Cut, was released in 1999, as well as a double disc release featuring one of the band's live shows at the Recher Theatre in Towson, Maryland.
[edit] 2000s
Crack the Sky (Rick Witkowski and John Palumbo), June 26, 2004

Crack the Sky continues to perform occasional live shows and collaborate on new music under Palumbo's guidance. The albums Ghost and Dogs from Japan were released to critical acclaim in 2001 and 2003, respectively, and the band continues to enjoy a devoted fan following. The band completed a new concept album in 2007, entitled The Sale, which features the return of original bassist Joe Macre performing and co-producing the record with John Palumbo[2]. In 2008, Joey D'Amico and Joe Macre returned as Crack the Sky's drummer and bassist, respectively. In addition the band headlined the ROSfest progressive music fesival and later a full length DVD of their performance called "Crack The Sky, All Access". The DVD was shot on six hi def camaras in 5.1 surround sound and includes pictures and interviews with the band members. The band is also only months away from releasing their latest studio album to be entitled "Machine" and the album will mark the first time in over 30 years that original members Joe Macre and Joey DeAmico will record new material as CTS.

The Beauty Of Nothing