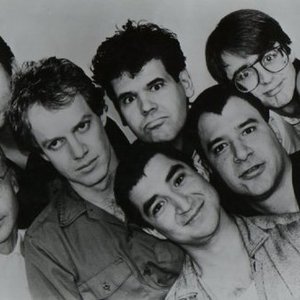 Richard Elfman founded the theatrical troupe The Mystic Knights of the Oingo Boingo. In 1978 the remnants of the Mystic Knights formed together under lead singer Danny Elfman as the band Oingo Boingo. The hyperkinetic ska-flavored New Wave band is characterized by their manic live performances and eclectic range of songs; Elfman and the band performed for a remarkable twenty years. The band from Los Angeles, California, USA...

The band from Los Angeles, California, USA, a pared-down version of the theatrical troupe The Mystic Knights of the Oingo Boingo, released eight major albums and two live compilations, each containing songs that varied from fast-paced ska to soulful jazz to emotional rock to off-kilter pop.

Starting in 1980, Oingo Boingo spent their first three albums establishing themselves as a band with quirky, bizarre, sarcastic, and anti-conformist vocals, lyrics, and instrumentation, among other things lambasting "normal" society and politics for their many hypocrisies and encouraging people to think for themselves. The band made a change toward a different sound when frontman Danny Elfman recorded So-Lo in collaboration with the band and a new label, beginning a trio of "new wave"-ish albums containing ballads and songs about life and mortality, including the famous Dead Man's Party. The band went on to record Dark At The End Of The Tunnel, a change toward a sort of Boingo-esqe "spirituality", and finally recorded their last album: dark, guitar-driven, hornless, influenced by The Beatles and Pink Floyd, eponymous with the new band name Boingo.

Now mostly known for their frequent contribution to movie soundtracks (including their most successful song "Weird Science"), Oingo Boingo formally broke up in 1995 after their last Halloween live concert, the reason being that 'it was time.'

Throughout the years, the following joined Elfman and Bartek as members of Oingo Boingo:

Steve Bartek, besides working with Danny, has composed music for various TV shows, including Tales from the Crypt and Desperate Housewives, and movie scores, such as The Art of Travel, Meet the Deedles and Cabin Boy.

Vatos formed a concert show along with Sluggo, Bartek, and Avila in California. The concert show features performances of Oingo Boingo's most popular songs. This has led to speculation about a reunion. In early 2007, Danny Elfman said there would not be a reunion. He has irreversible hearing loss and is worried that playing live would exacerbate it. He stated that some members may also suffer from the condition.

John Avila and Johnny "Vatos" Hernandez were two members of the trio Food For Feet. They also formed the rhythm section of Tito & Tarantula, a Los Angeles band fronted by Tito Larriva of The Plugz and the Cruzados. Avila and Hernandez also joined Larriva and guitarist Stevie Hufstetted in a one-off project band called Psychotic Aztecs. The Aztecs released one album on the Grita called Santa Sangre.

After the break-up, John Avila, guitarist Steve Bartek, drummer Johnny "Vatos" Hernandez, and saxophonist Sam Phipps (along with Doug Lacy and other musicians) formed a band called Doug & the Mystics. They recorded one album, [album artist=Doug & the Mystics]New Hat, which included a cover of the Oingo Boingo song "Try To Believe," original songs, and covers of songs by Frank Zappa and other artists.

During the Halloween 2005 season, Johnny "Vatos" Hernandez put together a tribute to the band (and to Halloween itself), joined by former Oingo Boingo members Steve Bartek, John Avila, and Sam "Sluggo" Phipps which took place at the Grove of Anaheim. Standing in for Elfman was Bt4, a young man whom many fans call "the Danny byproduct." During the Halloween 2006 season, there were two Johnny Vatos Tribute to Halloween shows, one in Los Angeles and one in Orange County, with Vatos, Bartek, Avila, Phipps, Legacy, and Bt4 once again on vocals. "Vatos" has announced his intentions of hosting yet another concert along these lines in the 2007 Halloween season, this time at the House of Blues branches on the Sunset Strip and in Anaheim.

In 2005, John Avila, Johnny "Vatos" Hernandez, and Steve Bartek joined the list of performers on the soundtrack of the 2003 re-imagination of the classic sci-fi series, Battlestar Galactica. Richard Gibbs joined at this time as well, but is credited as both a performer and composer. Their performances can be heard in seasons two and three, and will likely be heard on subsequent seasons of the series as well.