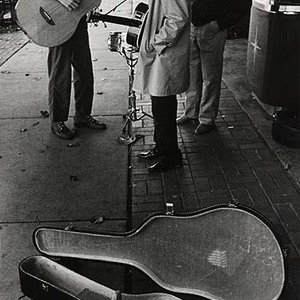 The Violent Femmes were an alternative rock band, formed in Milwaukee, Wisconsin, United States in 1980. The band originally consisted of Gordon Gano (vocals, guitar), Brian Ritchie (bass), and Victor DeLorenzo (drums), with second drummer Guy Hoffman being added into the band in 1993. The band split in early 2009, their last recording being a cover of the Gnarls Barkley song "Crazy", a response to Gnarls Barkley's cover of the Femmes song "Gone Daddy Gone" released the previous year.

Their music is an innovative combination of American folk music and punk rock. The lyrics mix common adolescent themes like yearning for love, sex and affection with explorations of sin, death, and the hope of salvation. Their songs often express both a lyrical and musical sense of humor. Critics often attribute the Violent Femmes as laying the groundwork of dynamicism for the 90s grunge movement.

In its early days, the band frequently played coffee houses and street corners. They were discovered by James Honeyman-Scott (of The Pretenders) on August 23, 1981, when the band was busking on a street corner in front of the Oriental Theatre, the Milwaukee venue that The Pretenders would be playing later that night. Chrissie Hynde invited them to play a brief acoustic set after the opening act. The band signed to Slash Records and recorded their eponymous debut in July 1982.

The group quickly gained a small cult following after the release of their self-titled album that never burgeoned into widespread popularity, although a few songs from this album did get some recognition ("Add It Up", "Blister in the Sun" and "Gone Daddy Gone"). The debut album Violent Femmes went platinum ten years after its release, and "Blister in the Sun" has become an alternative rock radio staple.

We Can Do Anything

Archive Series No. 1 Live In Iceland