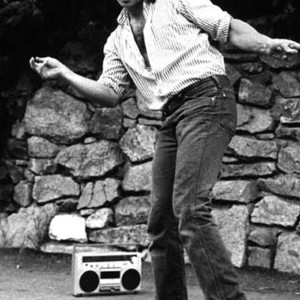 Jonathan Richman was born May 15th 1951 to a Jewish family in Natick, Massachusetts. He began playing music and writing his own songs in the mid-1960s. In 1969 he moved to New York City, where he spent time living on the couch of The Velvet Underground's manager and working odd jobs while trying to break in as a professional musician. Failing at this, he returned to Boston. Having moved back, he formed The Modern Lovers, a proto-punk garage rock band.

Other notable members of the group were keyboard player Jerry Harrison and drummer David Robinson, who later joined Talking Heads and The Cars, respectively. In 1972 they recorded a series of songs with John Cale producing, including the seminal "Roadrunner," which were eventually released on the group's sole album, Modern Lovers, in 1975.

Shortly after these recordings were made, Richman broke up the band and embarked on his long and eclectic solo career. For a while he continued recording under the "Modern Lovers" name (or rather, the more telling "Jonathan Richman and the Modern Lovers" appellation), but all the members were different, and in the new incarnation were essentially his backing band. The sound of the new group was considerably different as well, focusing on acoustic instrumentation rather than the prior electric guitars and drums. The album Jonathan Richman and The Modern Lovers was released in January 1977, Rock and Roll with the Modern Lovers followed a month later, and Modern Lovers Live in 1978.

In 1979 Richman finally went completely solo. That year's Back in Your Life was released under the "Jonathan Richman and the Modern Lovers" moniker, but this was true of only about half the disc?the rest was solo work. This album was probably the most extreme detour by Richman into eclecticism; after the odd but traditional acoustic rock of the previous albums, this one's solo tracks showed off a string bass and Glockenspiel as main instruments.A few years' hiatus ended in 1983 with Jonathan Sings!?memorably featuring a cover with Richman serenading a crowd wearing nothing but a guitar and neck strap. This was followed up with a series of pop efforts (Rockin' and Romance, It's Time for Jonathan Richman and the Modern Lovers, and Modern Lovers 88 from 1985, 1986 and 1988 respectively). Soon after, he returned to swooping madly around the musical landscape: country music with 1990's Jonathan Goes Country, and Spanish translations of his earlier work (as well as traditional Spanish songs) with 1993's Jonathan, Te Vas a Emocionar!

Always possessing an ardent cult following, Richman has become better known in recent years thanks to a series of appearances on fan Conan O'Brien's show; also helping was a major part in the 1998 movie There's Something About Mary, where he played half of a two-man Greek chorus that commented on the movie while performing in the framed action itself.

He has continued his release schedule all along, with You Must Ask the Heart in 1995, Surrender to Jonathan in 1996, I'm So Confused in 1998, Her Mystery Not of High Heels and Eye Shadow in 2001 and Not So Much To Be Loved As To Love in 2004. In 1998 a live album of Modern Lovers recordings from the early '70s was released, Live at the Long Branch & More. There is also a DVD of a live performance Take me to the Plaza 2002. A tribute album, If I Were a Richman, was released by Wampus Multimedia in 2001. In live 'solo' shows, he frequently tours with drummer Tommy Larkins, the other part of the two-man chorus mentioned above. He is a tremendously charismatic stage presence, and this has helped maintain his dedicated cult following.

No Me Quejo De Mi Estrella

Because Her Beauty is Raw and Wild

Not So Much To Be Loved As To Love

Her Mystery Not Of High Heels And Eye Shadow

You Must Ask The Heart