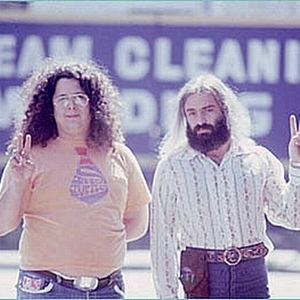 Mark Volman and Howard Kaylan, aka Flo & Eddie were the two driving forces behind '60s US pop harmony group The Turtles. Subsequent to the demise of The Turtles as a complete entity in 1970, Volman and Kaylan joined Frank Zappa's Mothers of Invention in the early '70s performing as The Florescent Leech & Eddie on a number of live performances and also participated in the Zappa film production and recording of 200 Motels.

Shortening their moniker to Flo & Eddie they also released a several albums as a duo, including the self-titled Flo & Eddie and the equally self-titled album The Florescent Leech & Eddie. An eclectic pair of characters if there ever was one, Flo & Eddie also scored success with their syndicated US radio show in the 1970s and even wrote the theme music for childrens TV shows Strawberry Shortcake and the Care Bears.
They also created an album under the name Checkpoint Charlie. This album was made entirely from the sounds of toys.

The Best Of Flo & Eddie