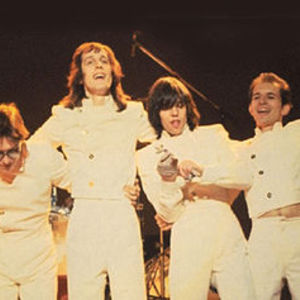 Utopia may refer to: 1) A progressive rock/aor band from New York, United States. (1974-1986) 2) A female fronted rock band from Bandung, Indonesia. (2003-present) 3) A grindcore band from Czech Republic. 4) A hip-hop artist from Finland. 5) A hardcore punk band from Poland. 6) A grunge band from Germany. 7) Initial project of Mamonas Assassinas. A rock band from Brazil 8) A pop rock band from Italy. 9) An indie rock band from Lithuania.

10) A alternative rock band from Chisinau, Republic of Moldova
11) A late-60s hard rock band from California, who released an album on Kent in 1967 and was re-released in 2001 by Arkama.
12) A drum and bass group from Russia inclduing the artist Kubrak
13) A Dutch melancholy Rock/Metal band fronted by a female singer.
14) A progressive metal group from Romania.

1) Utopia, sometimes known as Todd Rundgren's Utopia, was the band Todd Rundgren formed in the early 70s to play epic progressive rock. Like many progressive bands, they eventually simplified their sound into a sort of sophisticated New Wave and experienced some success in the early MTV era with humorous videos.

The band as an entity covered all styles of music. From rock, country, pop, classical and beyond. The vocal ability of the band overall was supreme; with only Queen even coming close to range and flexibility at that time.

All members are still quite alive and very active with their own projects. Todd Rundgren continuously produces and is always at the cutting edge with computers. Roger Powell works for Apple in a high level position within their music department and Willie Wilcox produces for many artists. Kasim Sulton has his own bass model and consistenly works in music with numerous artists.

Both Todd Rundgren and Kasim Sulton participated in the formation of The New Cars, replacing original members Ric Ocasek and the now-deceased Benjamin Orr. This continued Rundgren's fascination with creating songs and sounds that mimicked other bands' works (see Utopia's Deface the Music for the band's tribute to the Beatles). The New Cars toured and released one album, which contained only three original songs (all others were live performances of The Cars hits).

2) Utopia is a pop rock band from Bandung, Indonesia. Formed on August 8, 2003, the band consists of PiA (female vocals), Indra (bass), Dodo (guitars), and Tommy (drums). As of now, the band has released three albums (in order of release date): "Utopia", "Kekal", and "Indah".

3) Utopia is a grindcore band from Czech Republic.

4) Utopia is a hip-hop artist from Finland.

5) Utopia is a hardcore punk band from Poland.

6) Utopia is a grunge band from Germany.

7) Utopia is an indie rock band from Lithuania.

Swing To The Right