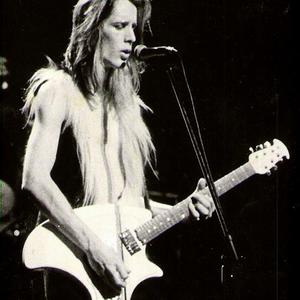 Todd Rundgren is an American singer, songwriter, and producer who started in the 60s with the psychedelic band Nazz in Philadelphia. His solo career started out successfully with such hits as I Saw The Light and Hello It's Me (which was a reworked Nazz tune). He formed a band called Utopia (or Todd Rundgren's Utopia) which concentrated on eccentric progressive epics, while also continuing to release solo albums. His production work started early, with work for Sparks and the New York Dolls, and continued with Meat Loaf, XTC, The Psychedelic Furs, and many others.

Todd Rundgren is well known among his fans as being an electronic music revolutionary. His production techniques, and his belief that he has ability to play just about any instrument at a mastery level, allowed him to release some of the most honest and personal music of his time. Many of his solo albums, including Something/Anything were made completely by himself. That is, he played all the instruments, sang all the vocals, did all of the recording, editing, mixing, and mastering, and even distributed the album through his own record label, Bearsville. In the particular case of Something/Anything, there was actually one side (side 4) which featured songs performed by a studio band, placed on the album to show Todd's ability in working with musicians.

For over thirty years now, Todd Rundgren has had a very successful musical career. He recently fronted, recorded and toured with the band The New Cars, which featured two of his own band members, and two of the remaining The Cars members. In addition, he released a solo album in 2004 entitled Liars, which featured the recurring theme of deceit and broken promises. He toured with a strong band for this album, which included his long-time bassist Kasim Sulton, and former The Tubes drummer, Prarie Prince.

On September 29th, 2008 Rundgren released his 20th studio album "Arena" via Cooking Vinyl Records in the UK (Hi-Fi Recordings in the USA), to critical acclaim.