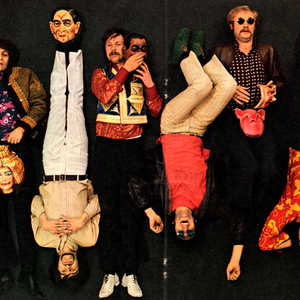 "Legs" Larry Smith
Bob Kerr
Former members
Vivian Stanshall (founding member); too many others to list. See: Band members.
The Bonzo Dog Doo-Dah Band (also known as The Bonzo Dog Band, The Bonzo Dog Dada Band and, colloquially, as "The Bonzos") are a band created by a group of British art-school denizens of the 1960s. Combining elements of music hall, trad jazz, psychedelic rock, and avant-garde art, the Bonzos came to the attention of a broader British public through a children's television programme, Do Not Adjust Your Set.


The band's formation
Unusually for a band, the actual date of conception for the Bonzos is known: 25 September 1962. It was on that day that Vivian Stanshall (tuba, but later lead vocals along with other wind instruments) and fellow art student Rodney Slater (saxophone) bonded over a transatlantic broadcast of a boxing match between Floyd Patterson and Sonny Liston.

Rodney Slater had previously been playing in a trad jazz band at college with Chris Jennings (trombone) and Tom Parkinson (sousaphone). Roger Wilkes (trumpet) was the founder of the original band at the Royal College of Art, along with Trevor Brown (banjo). They slowly turned their style from more orthodox music towards the sound of The Alberts and The Temperance Seven. Vivian was their next recruit and on that day in 1962, he and Rodney christened the band, The Bonzo Dog Dada Band. Bonzo the dog was a popular British cartoon character created by artist George Studdy in the 1920s and Dada after the early 20th century art movement.

Not long after Vivian, Rodney and Tom were evicted from their shared flat, the band added two more faces to the line-up: Goldsmiths College lecturer Vernon Dudley Bohay-Nowell and his lodger, songwriter/pianist, Neil Innes. According to Neil Innes' website,[1] the Bohay-Nowell was added to Vernon Dudley's name by Vivian Stanshall. The band had been working with drummer Tom Hedges before Rodney found Martin Ash, who later took the stage name of Sam Spoons and shortly afterwards got them their first pub gig, where they were noticed by Roger Ruskin Spear.

Ruskin Spear, the son of the British artist Ruskin Spear, claimed, "I couldn't believe anyone was that bad." He eventually changed his mind and, with his interest in the manufacture of early electronic gadgets/objets d'art and sound-making systems soon became an integral part of the band.

The line-up changed again with the departure of Roger Wilkes and John Parry, the trombonist. The two were replaced by, respectively, Bob Kerr and "Big" Sid Nichols. The final 'classic' band member, "Legs" Larry Smith joined in 1963, as a tuba player and tap-dancer (but later as a drummer), on Vivian's invitation.

The band's fortunes began to increase when their manager, Reg Tracey, secured them a deal with Parlophone Records in April 1966. Their first single, a cover of the 1920s classic, "My Brother Makes The Noises For The Talkies" was backed with "I'm Going To Bring A Watermelon To My Girl Tonight" which was rather too risqu? for radio.

A second single, "Alley Oop", backed with "Button Up Your Overcoat" followed in October of that year.

As the Bonzo Dog band's fame increased, they appeared as the resident band on Do Not Adjust Your Set, a children's show notable for having several future members of Monty Python's Flying Circus (Eric Idle, Terry Jones and Michael Palin) and David Jason in the cast.

Moving over to Liberty Records, the Bonzos released their first album, Gorilla, which included "Jazz, Delicious Hot, Disgusting Cold" which savagely parodied their early "trad" jazz roots and featured some of the most deliberately inept jazz playing ever recorded--the record company only allowed two hours of studio time per track, so it was completed in a single take to allow for the far more complex "The Intro and the Outro" in which every member of the band was introduced and played a solo, starting with genuine band members[2].:

Hi there, nice to be with you, happy you could stick around.
Like to introduce "Legs" Larry Smith, drums
And Sam Spoons, rhythm pole
And Vernon Dudley Bohay-Nowell, bass guitar
And Neil Innes, piano.
Come in Rodney Slater alto saxophone
With Roger Ruskin Spear on tenor sax.
Hi, Vivian Stanshall, trumpet. (Stanshall is the narrator on this track)
before including such improbable members as:

10 second sample from the album "The History of the Bonzos"


Problems listening to this file? See media help.
Princess Anne on sousaphone. Mmm.
Introducing Liberace on clarinet
With Garner Ted Armstrong on vocals
Lord Snooty and his pals tapdancing
In the groove with Harold Wilson, violin
And Franklyn MacCormack on harmonica
Over there Eric Clapton on ukulele [it actually was Clapton playing a ukulele], Hi Eric
On my left, Sir Kenneth Clark, bass sax. Great honour, sir
And specially flown in for us, the session's gorilla on vox humana. [loud angry growl]
Nice to see Incredible Shrinking Man on euphonium.
Drop out with Peter Scott on duck call. [sound of duck call]
Hearing from you later, Casanova on horn.
Yeah! Digging General de Gaulle on accordion. [brief accordion solo] Really wild, General! Thank you, sir.
Roy Rogers on Trigger [sound of flowing liquid].
Tune in Wild Man of Borneo on bongos
Count Basie Orchestra on triangle. [a single note is played] Thank you.
Great to hear the Rawlinsons on trombone
Back from his recent operation, Dan Druff harp
And, representing the Flower people, Quasimodo on bells,
Wonderful to hear Brainiac on banjo,
We welcome Val Doonican as himself. [Irish voice repeats "Hello there!"].
Very appealing, Max Jaffa. Mmm... that's nice, Max.
What a team, Zebra Kid and Horace Batchelor on percussion.
A great favourite and wonderful performer for all of us here, J. Arthur Rank on gong
This number was recorded on a four-track tape deck - most of the non-band "personnel" are simply faded in and out, and few notice they are absent in the later stages of the track.

Much later, Stanshall was to provide an introduction on Mike Oldfield's first instrumental album, Tubular Bells, which echoed the style of The Intro and the Outro, but without the blatant absurdities.


[edit] Urban Spaceman and beyond
They had a hit single in 1968 with "I'm the Urban Spaceman" produced by Paul McCartney and Gus Dudgeon under the collective pseudonym "Apollo C. Vermouth". The Beatles were great fans of the group and featured them performing the song "Death Cab for Cutie" in their film Magical Mystery Tour. The anarchic twelve bar blues "Trouser Press" ? featuring a solo by Roger Ruskin Spear on a genuine trouser press he had fitted with a pickup ? gave its name to an American anglophiliac rock magazine Trouser Press. "Can Blue Men Sing the Whites?" lampooned the British blues boom, and tap dancer/drummer "Legs" Larry Smith was an onstage hit with his lubricious dancing. Many of their songs parodied parochial suburban British attitudes, notably "My Pink Half of the Drainpipe" on the album The Doughnut in Granny's Greenhouse (a euphemism for an outside toilet, still common in the United Kingdom at the time).

In 1969 they released their third album Tadpoles. Most of the songs on this album were also performed by the group on Do Not Adjust Your Set. The same year they also released their fourth album Keynsham and appeared at the Isle of Wight Festival. Keynsham is a small town near Bristol in south-west England. The name of the album was almost certainly derived from an advertisement on Radio Luxembourg for a dubious method of forecasting results for football matches (and using these results in football pools). In the advertisement, which was of great length, Horace Batchelor, inventor of 'the amazing Infra Draw method', would repeatedly spell K-E-Y-N-S-H-A-M for those listeners who wished to purchase his secret.

The Bonzos toured the United States with The Who and also appeared at the Fillmore East with The Kinks. Introduced as a "warm-up act" for the real show, the Bonzos rushed out and did a series of frenetic calisthenics. True to the dada spirit, Stanshall performed a mock striptease and Roger Ruskin Spear, with a platoon of robots (including one that sang "I'm Forever Blowing Bubbles" while actually blowing bubbles), did whatever he did without regard for what the rest of the band was doing. As for "The Canyons of Your Mind", it featured such an incredibly bad guitar solo it drove audiences to open-mouthed delight.

While the group formally disbanded in 1970 their record company compelled them to reunite in 1971 to record a final album titled Let's Make Up And Be Friendly released in 1972.

One of the Bonzos' song titles, "Cool Britannia", was revived as a media label for late 1990s United Kingdom under Tony Blair.


[edit] Band members
The core members of the group for most of the band's career were:

Stanshall and Innes were the band's principal songwriters. After the band's demise, both became founding members of Grimms along with the members of The Scaffold.


[edit] Reunion
On 28 January 2006 many surviving members of the band played a concert at the London Astoria. Neil Innes, "Legs" Larry Smith, Roger Ruskin Spear, Rodney Slater, Bob Kerr, Sam Spoons and Vernon Dudley Bohay-Nowell appeared. There were also a number of special guests attempting with various degrees of success to be Vivian Stanshall, one of two members of the band not still living (the other being bass player Dennis Cowan), including Stephen Fry, Ade Edmondson, Phill Jupitus and Paul Merton. Their stage antics were very much in evidence including performances on the Theremin Leg and Trouser Press. The show was filmed and was broadcast on BBC Four and also released on DVD in May 2006.

A countrywide tour, with Ade Edmondson and Phill Jupitus, followed during November 2006, starting in Ipswich and ending with two nights at the Shepherds Bush Empire, where Paul Merton and Bill Bailey joined in for a handful of songs. David Catlin-Birch (lead guitar and vocals) from alternative pop group World Party and a member of The Bootleg Beatles joined the band for the tour.

Officially calling themselves The Bonzo Dog Doo-Dah Band again, they released a live double CD of the Astoria concert titled Wrestle Poodles... And Win! on 13 November 2006.

The reunited lineup were due to perform again in 'The Bonzo Dog Doo-Dah Band Christmas Show' on Friday 21 December and Saturday 22 December 2007 at the Shepherds Bush Empire in London, but these shows have been postponed without explanation. Since this second breakup of the band, Rodney Slater, Roger Spear, Sam Spoons and pianist David Glasson (ex Whoopee Band) have been performing regularly in Brighton as "Three Bonzos and a Piano" [[2]]

In 10 December 2007, the band released their first new studio album in 35 years, a 28-track album titled Pour l'Amour des Chiens ("For the Love of Dogs" in French).

History Of The Bonzos CD2

History Of The Bonzos CD1

Let's Make Up & Be Friendly

The Doughnut In Granny's Greenhouse