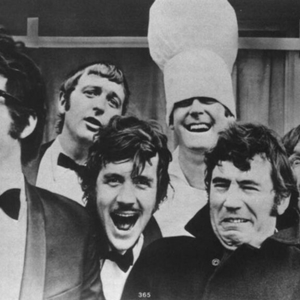 Monty Python is a comedy troupe of 4 Englishmen (John Cleese, Graham Chapman, Michael Palin, Eric Idle), 1 Welshman (Terry Jones) and 1 American (Terry Gilliam), best known for their legendary and influential sketch comedy show "Monty Python's Flying Circus" (which ran for four seasons from 1969 to 1974). The troupe also wrote and starred in the films "And Now for Something Completely Different" (1971), "Monty Python and the Holy Grail" (1975), "Monty Python's Life of Brian" (1979), "Monty Python Live At The Hollywood Bowl" (1982) and "Monty Python's The Meaning of Life" (1983).

The group formed in 1969 in London, England and ceased normal activity as a comedy troupe in 1983 although the members continue to appear in one another's projects and there have been sporadic reunions since then.

The group includes Graham Chapman, John Cleese, Eric Idle (the trio from Cambridge, who are all taller than all the other members of the group, and known as the more "aggressive" half of the group), Terry Jones (from Wales), Michael Palin (from Oxford) and Terry Gilliam (Minnesota in the United States). Chapman wrote the sketches with Cleese, Jones wrote with Palin, Idle wrote alone and Gilliam did the animations. Neil Innes and Carol Cleveland have both on occasion been mentioned as the "7th Python".

Graham Chapman, widely known as "The Dead One", died of cancer on October 4, 1989, the day before Python's 20th anniversary (thus being called "the greatest party pooper of all time" by Terry Jones), is tagged as the greatest actor among the group by his fellow Pythons. He had problems with alcohol and was a dedicated smoker of the pipe (he appears with a pipe in his hand in most of the Python sketches). He was known for his outstanding and abstract sense of humour; Cleese states that during their sketch-writing partnership Chapman did not say much, but when he said something it was often brilliant. The term "pepperpot" which is used to describe middle-aged ladies was found by Chapman.

John Cleese, probably the most famous Python on the other side of the Atlantic, is most widely known for his silly walk - the famous walk that he invented for Monty Python's Flying Circus, and repeated in one episode of Fawlty Towers, where he tries very hard not to remind his German visitors of the World War II by doing impersonations of Hitler. He lives in the USA. He played the lead as Basil Fawlty in "Fawlty Towers". He has been reported to be the first man to say "shit" on British TV and the first man to say "fuck" at a British memorial service.

Eric Idle is the composer of most Python songs (along with Neil Innes) such as the Python anthem "Always Look on the Bright Side Of Life" (which is also played after Iron Maiden's shows). His outstanding linguistic abilities have earned him the name "Master of the One-Liner". He created the Beatles parody "The Rutles" along with Neil Innes, and recently adapted the Python movie "Monty Python and the Holy Grail" as a Broadway musical called "Monty Python's Spamalot". His most famous Python role is the character he plays in the "Nudge Nudge" sketch. He is the self-acclaimed third tallest and sixth nicest Python.

Terry Gilliam was the only American in the group and has one of the most successful post-Python careers among the six, as he is the director of hugely popular movies like Brazil, 12 Monkeys, Fear and Loathing in Las Vegas, and The Fisher King. His part was instrumental in helping Python gain their reputation as a unique comedy group, his animations helping them link sketches (which, of course, don't have punch lines) in an unprecedented manner. He has become a British citizen in early 2006 and renounced his American citizenship shortly afterwards. He acknowledges The Goon Show, a radio show aired in the 1950s on BBC radio, written by Spike Milligan and performed by Spike Milligan, Harry Secombe and Peter Sellers, as the main reason he chose Britain as his homeland.

Terry Jones is the most successful actor of the woman role (as demonstrated in the Spam sketch, which is only one of numerous occasions in which he has voiced the trademark of a high-pitched female impersonation). He is the director (or co-director) of all Python movies. He has also written, directed and appeared in a few more movies which featured some of his Python mates; despite the fact that these movies aren't quite a match for his work in the Flying Circus, they include some hilarious scenes, such as the singing scene in Erik the Viking. He is the writer of such excellent songs as "I'm So Worried" and "Traffic Lights". He has done a few historical documentaries, and in one of them he briefly acts the part of King Richard III (called "Ring Kichard the Thrid" by the Eric Idle character "the man who speaks entirely in anagrams", which prompts Michael Palin the interviewer to suggest that "Ring Kichard is surely a spoonerism and not an anagram", which results in Eric Idle's character leaving the studio, saying "If you are going to split hairs, I'm going to piss off" (which can serve as a pointer to the Eric Idle-John Cleese movie "Splitting Heirs")).

Michael Palin, known as the nicest python, and the favorite Python to work with for John Cleese, has done numerous travel documentaries during his post-Python career. His amazing sense of humour has inevitably permeated into what would otherwise be just ordinary documentaries (occasions like the Polushka Pole incident and thanking the goddess for her "nice mountain", to name a couple). This nice man, who finds it very difficult to say "no", is the only one who said "no" to a reunion in their 30th year. He is the inventor of the threat "If you don't cooperate, I will get nasty and start using some Dutch words".

As admitted on several occasions, the group likes to dress up as women.

Having said all that, Terry Jones is actually Welsh.

The Final Rip Off CD2

The Final Rip Off CD1

The Meaning Of Life (Remastered 2006)

Hastily Cobbled Together For A Fast Buck (Vinyl)