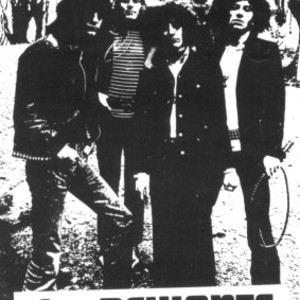 The Deviants (formerly the Social Deviants) were a musical group in the United Kingdom. Out of the Ladbroke Grove UK Underground Community, a number of bands would emerge. Perhaps the most anarchistic band of the Underground was the Deviants founded and fronted by singer/writer Mick Farren, the Social Deviants, later just the Deviants, made three bizarre albums in two years. Mick Farren states that The Deviants were a community band which "did things every now and then - it was a total assault thing with a great deal of inter-relation and interdependence".

Musically, Farren described the Deviants as "teeth-grinding, psychedelic rock" somewhere between the Stooges and The Mothers of Invention [1].

After the Deviants folded in 1969, Farren recorded a solo album, Mona, with a short-lived Pink Fairies line-up that featured ex-Pretty Things drummer/singer Twink and Steve Peregrin Took. When this first Pink Fairies fell apart and Twink ran off with the name to form Pink Fairies mark 2, Farren initially considered continuing to work Steve Took using the band name Steve Took's Shagrat with Larry Wallis. Took and Farren fell out so it didn't happen.

Many of the band members for the Deviants and the Pink Fairies were interchangeable and both names have been used for various one-offs over the years. In February 1984, Farren was joined by ex-Pink Fairies member Larry Wallis and original Deviant (as well as Pink Fairies member) Duncan Sanderson. They were billed as the Deviants and played a London gig at Dingwalls which was released as the album Human Garbage. Mick Farren's latest incarnation of the Deviants, Dr Crow, in 2002 which opens up with the title track "When Dr Crow Turns On His Radio".

As a lyricist Farren provided the words for 'Lost Johnny', recorded by Hawkwind(1975) and Mot?rhead(1977); as well as for several songs on Larry Wallis' first ever solo album Death in the Guitarfternoon released in 2002.

By Mick Farren
From MOJO Magazine October 1999
originally published under the title "We Mean It, Maaan!)

SHALL WE BEGIN AT THE HIGH END...

I had ingested something. I can't quite recall what. I'm pretty sure it wasn't acid, more likely out of those alphabet-soup fringe psychedelics, ineptly manufactured from some hellspawned combination of nerve gas and horse tranquilliser, that either fried your mind or did nothing at all. In this case, the result was to make me paranoid and jumpy, and it transformed visuals into the cheap colours of a Japanese monster movie. Even though the discontent among we four Deviants was, by that point, growing like a festering boil, we all know that the afternoon's show in Hyde Park was significant and I had sworn that I'd behave myself. And so, being plainly drugged, I was already getting some dubious looks, particularly from guitarist Paul Rudolph and head roadie Boss Goodman.

Have Left The Planet

Eating Jello With A Heated Fork