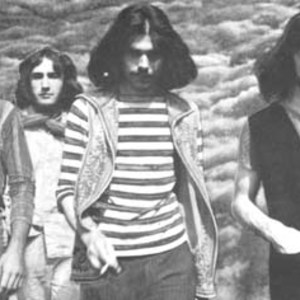 There are 2 groups named High Tide. A current Reggae/Rock Group from the USA and the Classic Progressive Rock Group from the UK that was active during the 1970s. High Tide UK Bio: High Tide, although they never managed much commercial success, are sometimes credited as one of the first heavy metal bands. The sound on their two historical album can be likened to Blue Cheer or Steppenwolf (but with lengthy improvisations in some tracks). They are also cited as a notable precursor of Prog Metal.

High Tide UK Bio:
High Tide, although they never managed much commercial success, are sometimes credited as one of the first heavy metal bands. The sound on their two historical album can be likened to Blue Cheer or Steppenwolf (but with lengthy improvisations in some tracks). They are also cited as a notable precursor of Prog Metal.

The original line-up was a quartet consisting of a singing guitarist, a violinist sometimes playing keyboards and a rhythm section. After the second album's release, their drummer left for health reasons, and High Tide did not release another album for some 18 years although they continued recording fairly regularly with an unstable line-up, the only mainstay being Tony Hill. Starting in 1988, they released seven records in a span of three yearts, consisting of tracks from the intervening years appearing on different records and no clear recording dates given.

A group that may have been too clever by half to succeed in England, High Tide never received more than a minimal amount of acceptance in their own country, but found a cult audience on the European continent. Formed in 1969, they played progressive rock with some folk and pop influences. Tony Hill was the singer and guitarist, Simon House played violin and keyboards, Peter Pavli handled the bass, and Roger Hadden played the drums. They were signed to Liberty Records' U.K. division in 1969 and released two albums over the next year -- Sea Shanties and a self-titled second album High Tide -- both of which featured dazzling guitar work by Hill and occasional striking interplay between his instrument and House's violin. The group never really found an audience however, splitting up in 1970. Simon House later became a member of Hawkwind, played with David Bowie, and joined members of the Third Ear Band to perform on the soundtrack of Roman Polanski's movie Macbeth. (www.allmusic.com)

High Tide USA Bio:
San Diego, California. Popular for it's pristine weather, beautiful scenery, and perfect surf breaks, this town became the stomping grounds for a group of local musicians who got together to share their souls, and to collaborate on their influence of Dub, Rock, Ska & Reggae. On and off the stage the band not only remains committed to the music, but continues to be a cohesive family of brothers. Now known as one of Southern California's most electrifying bands, High Tide has been expanding on its original style & eclectic sound since 2003.

Rooted in a reggae beat they often push traditional riddims to their very edge and keep the club rocking nonstop. With a throwdown style from house party beginnings, vocalist Ed Barrena leads a topnotch group of dedicated musicians and the result is a harmonious rhythmic vibration that cannot be denied. Often featuring the dancehall stylings of guest vocalist, Baby Mouse, the band is known for being versatile and unique. They have toured throughout the entire Southwestern US, establishing their mark in several locales including Arizona, the Bay Area, and Orange County.

High Tide spent most of 2006 and 2007 in the recording studio laying down tracks that would end up coming out on two seperate cds. The 5 song Acoustic EP "Not For Profit" was released in the summer '06 as a demo. The bulk of the hard work during this time was put in by the trumpet player, Bob Rissolo. He worked extremely hard to engineer and co-produce a full length 17 track album titled "Play Me Reggae". Both albums have sold copies around the world including Japan, and Europe. All of High Tide's recorded albums are currently available on Itunes.

High Tide brandishes a true Champion Sound. They have won multiple Battle of the Bands in San Diego, beating large fields of artists to appear at Concert Venues. In 2007 they had an opportunity to open the famous UCSD Sungod Festival which was headlined by TI and Third Eye Blind. Next the group finished in the top three at the 2008 Del Mar Fair Battle of the Bands. Subsequently they went on to earn back to back appearances on the Ernie Ball Stage at the San Diego Vans Warped Tour by winning Battle of the Bands in 2008 & 2009. The 2009 Warped Tour was one of the bands most memorable sets to date.

Rock stations, 94/9 and 91x feature High Tide regularly on their local shows, with tracks and interviews. The band has had multiple songs from both their acoustic EP "Not For Profit" and full length album "Play me Reggae", broadcast throughout San Diego County. They were also recently featured on "The Pyles Sessions" with local FM 94/9 DJ Tim Pyles. They were given 40 minutes of airtime to feature the music and the vibes!

High Tide continues to write and perform new songs for packed crowds throughout the region. High Tide has been a featured artist at premier venues and has played with many national acts including Eek - A - Mouse, Jr. Reid, Buck O Nine, HR of Bad Brains, Pepper, Bfoundation, Mike Pinto, Common Sense, Ozomatli & S.O.J.A. High Tide is known for always bringing that SoCal intensity with a Rocksteady style. They take you to a place where you can dance through the good times and stomp out the bad. Peace!

Not For Profit (Acoustic EP)

The Reason Of Success