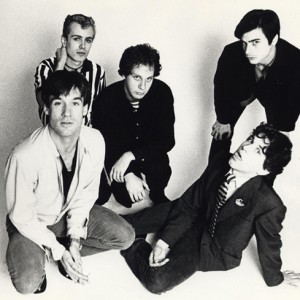 1) An alias of Umek, released 4 Techno EPs on Tortured Records.
All his tracks are called Mechanisms, starting from A, currently the last one is S.

3) An american punk rock band Mumps
From their website:
Kristian Hoffman first met Lance Loud in Mr. Baker's art class at Santa Barbara High School. Lance was pinning dead avocado leaves to the neck of a huge papier mache sculpture of a dodo bird. This vision set the tenor for many of their subsequent adventures together.

Even though they recorded a pre-release version of the Rolling Stones playing ?Brown Sugar? at Altamont, and claimed authorship of that revered composition until ?Sticky Fingers? was released, Lance's and Kristian's shared obsessions for the Velvets, the Stooges, The Kinks, Sparks and the Small Faces might never have led to forming a ?real? band had they not run away to New York City as teenagers and witnessed the explosive birth of the New York Dolls. This was all the encouragement they needed.

It wasn't enough for Kristian to just design the famous ?Bendover Girl? insert for the Doll's first album - Kristian and Lance HAD to form a band. So conscripting S.B.High School alumnus Jay Dee Daugherty, along with shy Vermont transplant Aaron Kiely and D.C. guitar god Rob DuPrey, the Mumps were born.

Mumps rehearsed, wrote a set of crazily varied glam pop kitsch ditties, and opened for Cherry Vanilla at Trude Hellers for their live debut to a crowd that included David Bowie and Tomata DuPlenty.

But it wasn't until their friend Richard Hell dragged them down to the Bowery to the then unknown club named CBGBS, that Mumps found their spiritual home where they could grow and blossom into one of the most popular and revered acts of the late 70's NYC punk movement.

Jay Dee Daugherty was famously seduced away by Patti Smith amid tears and recriminations, and Aaron Kiely returned to Vermont. But the new Mumps with heartthrob Kevin Kiely on bass and rock solid Paul Rutner on drums emerged more powerful than ever.

Mumps found their real voice with critically lauded compositions like ?Crocodile tears? and ?Anyone But You?.

Mumps combined Lance's hyperkinetic energy and impromptu witty asides with dayglo thriftstore/pimp finery, a methedrine rush of crazed leaping, falling and posing, a catalog of bitingly sarcastic yet hummable originals, and a scorching rock assault that belied the preciousness of their Britpop forbears to make their shows inimitable blasts of barely contained musical chaos.

Regular weekends at CBGBS and Max's opening for Television, Blondie, the Ramones, and other popular art rock congregations of the time like Isis and Orchestra Luna, plus incessant east coast touring, led to ever increasing popularity and soon they were headliners.

Malcom McLaren told Mumps ?Besides Richard Hell, you are the ONLY interesting band in N.Y.!? and returned to London to retrofit Mr. Hell's look and attitude and a dash of the Mumps crazed panache onto the still glam boogie Sex Pistols. John Cale wanted to produce ?Before the Accident?, but Mumps vetoed the early Sparks-flavored composition in favor of going to California to record ?Crocodile Tears.?

As the first NYC ?punk? band to play Los Angeles, Mumps were welcomed with open arms (and beds!) by all of the L.A.underground's congnescenti and nascent punks-in-waiting: the Screamers, the Germs, the Zeros, and future members of the Go-Gos, the Bags, the Dickies, and the Gun Club. The Mumps unquestionably inspired a legion of aspiring L.A. musicians to take their rock dreams more seriously and get out there to DIY. Playing with the Dead Boys, the Quick, Devo, Cheap Trick, and Van Halen(!) quickly brought Mumps the kind of screaming adulation they also received in Philadelphia, Boston, San Franciso, and Washington D.C.

With John Hewlett (of 60's brit outrage-mongers ?John's Children?) and Joseph Fleury (who also managed Sparks) as managers it seemed the juggernaut was unstoppable.

But somehow, as nearly all of Mumps contemporaries went on to label deals and internationally released albums, the Mumps remained curiously unsigned. Was it Lance's flamboyantly outrageous open sexuality? Was it that the Mumps were too ?pop? in a market increasingly geared to punk-by-numbers? Was it that the Mumps were perceived as cashing in on Lance's notoriety from the controversial PBS documentary ?An American Family?? Was it that Mumps' live shows could be inspiringly energetic, but of maddeningly inconsistent technical prowess?

It mystifies and rankles to this day that Mumps were never given a chance to give their best compositions the studio treatment afforded even the most marginal NYC outfits like the Tuff Darts. But at the time it just caused Mumps to turn inward and blame eachother. Your first band is like your family - and you fight and blame the way brothers do - not like ?professional? musicians. So even though Mumps returned to New York to a second wave of adulation even greater than the first - the first audience of artists and musicians and East Village bohemians had given way to genuine hordes of screaming salivating panty-throwing teenage girls, as documented in so many articles of the time - Mumps became disillusioned with their lot and doubtful about their future.

After a self released second single, ?Rock and Roll This, Rock and Roll That?? received wide critical praise and admirable sales, but still failed to inspire a label to sign them, Mumps agreed that if a scheduled demo session for Sire records failed, they would call it quits. Without the manifesto statement of an album to back them up, and help them position themselves alongside their contemporaries as artists to be reckoned with, Mumps felt the battle was no longer worth it.

Seymour Stein, for reasons unknown (although Lance insisted at the time a single unperformed blow job was to blame), passed on a demo of songs that inspired such teen tribal rioting at their live shows that even Mumps themselves were a little scared.

Of course the two hours in Sire's basement with a studio hack did not quite capture the voodoo that made the girls go wild, but wasn't it the label's duty to see beyond that? But they didn't - and so, unceremoniously, Mumps passed into history.

But with the explosion of the internet and the 1995 release of the ?Fatal Charm? compilation, it was apparent that a whole new generation of pop/punk aficianados were ready to lap up what the major labels had denied them - and now we're ready to prove once more that Mumps can still make you Scream - and Scream Again!