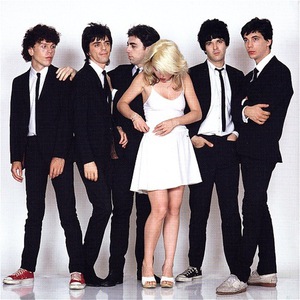 Blondie released their first album Blondie in 1976. The album was mildly successful and spawned the Australian hit single "In The Flesh".
Gary Valentine left the band later that year, and they continued briefly as a foursome, recording Plastic Letters which contained the hit "Denis".

They added Los Angeles-based musician Frank Infante (guitar, bass guitar) in 1977 who replaced Gary Valentine. Infante had already played guitar on one track on Plastic Letters. The band went out playing live with Infante and Stein swopping between playing guitar and bass guitar through out each concert. They then also added British born but LA-based Nigel Harrison (bass guitar), making Blondie a six piece for the first time. Harrison was a former member of the glam band Silverhead.

In 1978 they released the album that would make them international stars, Parallel Lines. The album spawned several hit singles, including the number one hit "Heart Of Glass", "Sunday Girl", "Hanging On The Telephone" and "One Way Or Another".

In 1982, health problems, declining sales and inter-band tension caused the band to split. Harry kept a low profile for a few years while she nursed (now former) boyfriend Stein through a serious illness, but then continued a solo career as an actress/singer.

Reformation plans begun in 1996 with a line-up that included Harry, Stein, Destri, Burke, Valentine, and Harrison. Infante was not invited to the reunion. Valentine and Harrison were eventually (and unceremoniously, they claim) replaced by Paul Carbonara (guitar) and Leigh Foxx (bass).

The band released No Exit in 1998, which did quite well in both US and UK charts and contained the number one hit single "Maria".

The album did not include any song contributions from Valentine or Harrison, despite them recording early sessions for the album and Valentine being assured by Stein that they would use his already recorded song "Amor Fati". Harrison and Infante later filed an unsuccessful lawsuit claiming breach of contract for not including them in the reunion.

The Curse of Blondie was released in 2003 and, while not matching its predecessor in sales, was critically acclaimed and spawned the global dance hit "Good Boys".

Destri retired from touring in 2004, but is still listed as a band member on their official web site. Kevin Patrick (keyboards), Destri's former keyboard tech and assistant, replaced him soon followed by Matt Katz-Bohen in 2008.

The band's 2006 induction ceremony into the Rock And Roll Hall Of Fame was the scene of an awkward moment between Infante and Harry, during which he asked that the former members be allowed to play along with fellow inductees Harry, Stein and Burke during the band's set, since it was the original band that was being inducted. Harry replied "Can't you see my band is up there?" prompting Infante to counter "I thought it was Blondie that was being inducted."

In 2006, the band toured as the opening act for The New Cars on the "Road Rage Tour." Although Harry was more than 60 years old, the band still managed incendiary versions of their old hits, while playing with enough fire to remind the audience of their punk roots.

In 2007, the band embarked on a tour of Europe, to coincide with the DVD release of the first ever music video album "Eat To The Beat".

On June 5, 2008, Blondie commenced a world tour to celebrate the 30th anniversary of Parallel Lines with a concert at Ram's Head Live in Baltimore, Maryland. The tour covered some Eastern and Midwestern US cities throughout the month of June. In July, the tour took the band overseas to Israel, the UK, Russia, Europe and Scandinavia, wrapping up on August 2, 2008 at Rockefeller in Oslo, Norway.

Clem Burke and Paul Carbonara both recently told interviewers that the band is working on another record, which would be their first new album since the release of The Curse of Blondie in 2003. Carbonara described it as "a real Blondie record.

Blondie undertook a North American tour of mid-sized venues with Pat Benatar and The Donnas in the summer of 2009. Following the tour, in October, the band began recording sessions for their ninth studio album with producer Jeff Saltzman in Woodstock, New York. In December 2009, the band released the song "We Three Kings" to coincide with the Christmas holiday.

The new album, to be titled Panic of Girls, which was being mixed at the time, was said to follow in 2010. Chris Stein stated that Dutch artist Chris Berens will provide the cover art. In April 2010, it was announced that guitarist Paul Carbonara had amicably left Blondie to pursue other projects and was replaced by Tommy Kessler. Panic of Girls is tentatively set to be released in 2010/2011.

In June 2010, Blondie began the first leg of a world tour named "Endangered Species Tour", which covered the United Kingdom and Ireland, supported by UK band Little Fish. The set lists featured both classics and new material from the forthcoming Panic of Girls. After a break in July the tour will resume in August and cover the United States and Canada over a course of six weeks. Blondie is then set to take the "Endangered Species Tour" to Australia and New Zealand in November and December. It was revealed that the bands album will be released on the Australian Sony label in November 2010, and elsewhere in January 2011.

Songfacts reports that Mother, the first single from Panic of Girls received its global premiere on BBC Radio on March 17th, 2011 and was made available for purchase on May 23, 2011.