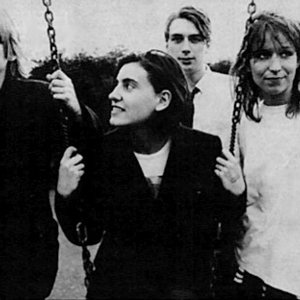 Elastica were a Britpop band formed in London, England in 1992 and made up of: Justine Frischmann (vocals and guitar), Donna Matthews (guitar and vocals), Annie Holland (bass), and Justin Welch (drums). Later members included Shelia Chipperfield (bass), Dave Bush (keyboards), Paul Jones (guitar), and Sharon Mew (keyboards and vocals). Their first single was 1993's "Stutter", which was a word-of-mouth hit largely due to the promotional efforts of Radio 1 DJ and Deceptive Records label boss Steve Lamacq.

Their first single was 1993's "Stutter", which was a word-of-mouth hit largely due to the promotional efforts of Radio 1 DJ and Deceptive Records label boss Steve Lamacq. In spite of a period of relative quiet, Elastica's fame grew throughout 1994 as Frischmann's relationship with Blur's Damon Albarn made tabloid headlines. Elastica's first LP, Elastica, entered the charts at #1.

Further UK chart hit singles followed: "Connection" and "Waking Up". In 1995 there was a lawsuit from Wire claiming that many of the band's melodies were taken from Wire compositions. Notably, Wire's "I Am the Fly" has a chorus similar to Elastica's "Line Up", and the intro of "Connection" is nearly identical to Wire's "Three Girl Rhumba". Indeed the band had originally intended to sample the intro of the song directly. The Stranglers also passed comment that Elastica's "Waking Up" bore a marked resemblance to their song "No More Heroes". The band did not deny these accusations and were not ashamed by these similarities, stating that all pop bands have borrowed ideas and all music was eventually recycled.

Elastica were able to garner better American sales than other Britpop bands, replacing Sin?ad O'Connor on Lollapalooza in 1995. "Connection" and "Stutter" were huge airplay favorites on modern rock radio in the United States and also both charted Pop. Among their extensive tour schedule the band performed at Glastonbury in 1995, where their set was interrupted by a streaker, a George Best look-alike, who would briefly join the band as a keyboard player in 1997.

After extensive touring, the band began to experience personnel problems. In 1997, bassist Annie Holland left the band, citing repetitive strain injury following excessive touring as her reason for departure. In 1999 Donna Matthews left the band. There were several line up changes and keyboard players. Various supporting musicians came and went. Their second album was much delayed after several years of recording. There were worrying rumours of entire albums being scrapped and band tensions due to the perfectionism of Frischmann. The "lost years" of the band were often compared to the Stone Roses recording their Second Coming album.

A quickly recorded lo-fi self-titled EP was released in 1999, and the follow-up LP, The Menace, was finally released in 2000 to moderate sales. A less focused effort than their debut, the album nonetheless contained some interesting moments and more electronic songs than before. One of the high points was "How He Wrote Elastica Man" featuring Mark E. Smith (of The Fall) on vocals, and a cover of Trio's 1982 hit "Da Da Da". A new line up was revealed with two keyboard players replacing Matthews for tour dates.

The band made their long-awaited UK comeback at the Reading Festival in 1999, where they headlined the Radio 1 stage. A largely successful UK tour followed in 2000 to support the release of The Menace, although their festival appearances that year were marred by illness. The band released a final single "The Bitch Don't Work" on limited edition 7" and announced their break-up in September 2001.

Elastica's song "Connection" was used in May 2004 in Garnier television commercials, and was also used as the theme of Trigger Happy TV.

The Radio One Sessions