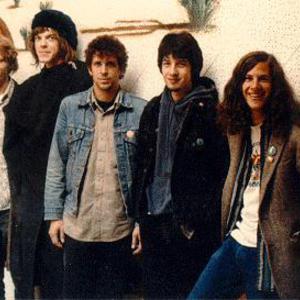 Camper Van Beethoven is an alternative rock band that was founded in 1983 in Redlands, California, though the band soon moved to Santa Cruz, California. Camper Van Beethoven mixed elements of pop, ska, punk rock, folk, country, and acid rock into an eclectic, catchy and sometimes mysterious ensemble, years before the so-called alternative rock moniker came to mainstream attention. The group's trademark violin-coated melodies and their ironic take on American culture put them one step away from being a novelty act in the eyes of many critics.

The group's trademark violin-coated melodies and their ironic take on American culture put them one step away from being a novelty act in the eyes of many critics. But as the band would move from irreverently playful to experimental with their intricate, psychedelic pop meanderings they carved out their own niche in the music world. CVB consciously played with building a mystique about the band, using articles, liner notes and press interviews to weave a bizarre mythology about the band, to the point where it is still often difficult to distinguish fact from fiction.

CVB had roots in the earlier projects Sitting Duck and Estonian Gauchos, proto-CVB projects from which some of the earliest CVB songs originated. Original bandmembers from CVB's early recordings, including 'Telephone Free Landslide Victory,' included David Lowery, Chris Molla, and Anthony Guess, all of whom also did time in Eric Curkendall's project Box O'Laffs.

The core touring and recording contingent of this band consisted of David Lowery, Victor Krummenacher, Jonathan Segel and Greg Lisher with Anthony Guess on drums from early 1985 to fall 1985 for their first album, 'Telephone Free Landslide Victory'. Guess left the band in late 1985 following the tour and went on to collaborate with numerous other musicians and bands, including Pile of Disaster, World Entertainment War, Calm Down Juanita, the Hollywood Lightweights, Billy Dwayne & The Creepers, Travis Morrissey & The Good Ship, and his current project, I Die Everyday.

Chris Pedersen took over drumming in the late 80's and since reformation in 2000, with Cracker drummer, Frank Funaro. After signing to Virgin Records in 1988 and releasing two eclectic yet slightly more accessible LPs, they disbanded in 1990; singer David Lowery went on to found the band Cracker (with guitarist Johnny Hickman, a former member of Estonian Gauchos), while the other members - guitarists Greg Lisher and David Immergl&uuml;ck, bassist Victor Krummenacher and drummer Chris Pedersen - devoted themselves full-time to the Monks of Doom, which had begun several years earlier as a non-Lowery side project. Violinist Jonathan Segel went on to play with Granfaloon Bus, Dieselhed, Hieronymus Firebrain, Jack & Jill and more. Segel and Krummenacher also continue to release solo recordings. More recently Segel has been involved in experimental music, including collaborations with Fred Frith and Joelle Leandre. Krummenacher and Segel collectively run their own record label, Magnetic. Chris Pedersen moved to Australia and currently plays drums for the dub band Daktari.

In 2000, ex-members regrouped to compile the experimental rarity set Camper Van Beethoven Is Dead. Long Live Camper Van Beethoven. In 2002, they released Tusk. Allegedly recorded in 1987, it had all the same tracks as the Fleetwood Mac album of the same name, and a parody of the original album's cover art. A series of reunion tour dates followed with many of the band's former members. The group officially reformed in 2004 to record New Roman Times, their first official studio album in 15 years. A live concert disc was also released entitled In The Mouth of the Crocodile, capturing a 2004 reunion performance in Seattle. Also, segments of a 2004 performance in Chicago were released the following year as Discotheque CVB: Live In Chicago, which was only available at a limited number of record stores. The band continue to play live and co-host the Annual Cracker Camper Van Beethoven Campout, a 3-day alternative music festival in Pioneertown, CA held every September.

CVB's 1985 staple "Take the Skinheads Bowling" was covered by Teenage Fanclub and used as the title track for the 2002 Michael Moore film Bowling for Columbine. A portion of the original Camper Van Beethoven recording can be heard as an introduction to the DVD release of the film. The song has also been covered by many other artists, most notably Manic Street Preachers and Sugarlust, who play it in every show they do; they all have skinheads and it has become their signature cover song.

Members of Camper Van Beethoven collaborated with Eugene Chadbourne on a number of records under the name Camper Van Chadbourne.

The band's official site is campervanbeethoven.com

In The Mouth Of The Crocodile