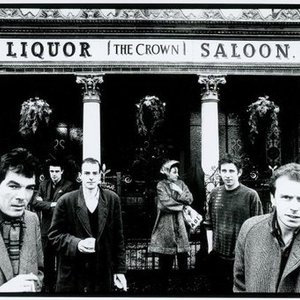 The Pogues are a popular Irish folk rock band of the 1980s and 90s. They have a strong following, essentially invented celtic punk and had a large influence on the larger celtic fusion scene as well. The Pogues were founded in King's Cross, a district in north London, in 1982 as Pogue Mahone ? "pogue mahone" being the Anglicisation of the Irish p?g mo th?in, meaning "kiss my arse". The band specialised in Irish folk music, often playing with the energy of the punk rock scene from which several of the members had their roots.

The Pogues were founded in King's Cross, a district in north London, in 1982 as Pogue Mahone ? "pogue mahone" being the Anglicisation of the Irish p?g mo th?in, meaning "kiss my arse". The band specialised in Irish folk music, often playing with the energy of the punk rock scene from which several of the members had their roots.

Their politically-tinged music was reminiscent of The Clash, with whom they played (Joe Strummer produced one of their albums and even joined the group briefly), and used traditional Irish instruments such as the tin whistle, banjo, cittern, mandolin, accordion, and more. In the later incarnations of the band, after the departure of Shane Macgowan, electronic instruments such as the electric guitar would become more prominent. The first of The Pogues' albums, Red Roses For Me, borrows much from the punk tradition of MacGowan's previous band The Nipple Erectors (later dubbed The Nips).

Band history
Shane Macgowan (vocals),James Fearnley (accordion) and Spider Stacy (tin whistle) were the original members of the Pogues, in the days when they busked on the streets of London. Before the rest of the group formed, MacGowan and Stacy were rumoured to have played impromptu performances on street corners and city buses which attracted local interest to their talent. They later added Jeremy 'Jem' Finer (guitar, banjo), Cait O'Riordan (bass) and Andrew Ranken (drums). The band rapidly developed a reputation, started releasing independent work, and ended up opening for The Clash on tour in 1984. Shortening their name to "The Pogues" due to lack of radio play for the curse in their name, they released their first album Red Roses For Me that October.

Phil Chevron (guitar) joined the group soon after, then with the aid of punk and new wave forefather Elvis Costello they recorded the follow up, Rum Sodomy & the Lash, in 1985 (The album title is a famous comment attributed, probably falsely, to Winston Churchill and others in describing the traditions of the British Royal Navy). The album cover featured The Raft of the Medusa, though the faces on the characters in G?ricault's painting have been replaced with those of the band members. While the first album had featured a higher percentage of traditional songs, Shane MacGowan came into his own as a songwriter with this disc, offering up poetic story-telling, such as "The Sick Bed Of C&uacute;chulainn" and "The Old Main Drag," as well as definitive interpretations of Ewan MacColl's "Dirty Old Town" and Eric Bogle's "And the Band Played Waltzing Matilda," the latter of which has become more popular than the original recording.

The band failed to take advantage of the momentum created by the strong artistic and commercial success of their second album. They first refused to record another album (offering up the 4 track EP Poguetry in Motion instead); O'Riordan married Costello and left the band, to be replaced by bassist Darryl Hunt; and they added a multi-instrumentalist in Terry Woods, formerly of Steeleye Span. Looming over the band at this period (as throughout their entire career) was the increasingly erratic behaviour of their vocalist, principal songwriter and creative visionary, Shane MacGowan.

Success & breakup
The band remained stable enough to record If I Should Fall From Grace With God in 1988 (with its Christmas hit duet with Kirsty MacColl "Fairytale of New York") and 1989's Peace and Love. The band was at the peak of its commercial success, with both albums making the top 5 in the UK (nos. 3 and 5 respectively), but MacGowan was spiralling out of control. Following their next album, Hell's Ditch, MacGowan and the band parted company in 1991.

With his departure, the band was thrown into a state of flux. Without their singer, vocal duties were for a time handled by Joe Strummer, before Stacy finally took over permanently. Two politely received albums followed, the first of which, Waiting For Herb, contained the band's third and final top twenty single, "Tuesday Morning" which became their best selling single internationally. In 1996, the Pogues disbanded with just three members remaining.

Post breakup
Shane MacGowan remains the sole member of the band in the spotlight, having founded Shane MacGowan and The Popes in 1994. His autobiography, A Drink With Shane MacGowan, co-written with his journalist girlfriend Victoria Mary Clarke, appeared in 2001.

In July 2005, the band - again including MacGowan - played at the annual Guilfest festival in Guildford before flying out to Japan where they played three dates. Japan is the last place they all played together before MacGowan was originally sacked in 1991, and they have a strong following there. They played a date in Spain in early September. The reunited Pogues played dates in the UK with support from the Dropkick Murphys in late 2005, and re-released their 1987 Christmas classic "Fairytale Of New York" on 19th December, which went straight in at #3 in the UK Singles charts on Christmas Day 2005, showing the song's enduring popularity. On December 22nd 2005 the BBC broadcast a live performance (recorded the previous week) on the Jonathan Ross Christmas show with Katie Melua. "Fairytale of New York" was voted the greatest Christmas Record of all time for the second year running in a poll by UK Music Channel VH1, with "Fairytale of New York" taking in a whopping 39% of the overall vote.

The band have now also announced dates for a US tour in March 2006. The band have made no secret about the fact they've all been writing new music, fueling rumours that a new album may follow the tours.

The band were awarded the life time achievement award at the annual Meteor Ireland Music Awards in February 2006.

The Pogues In Paris: 30Th Anniversary Concert At The Olympia CD2