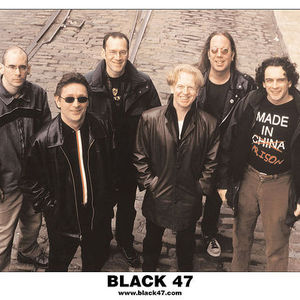 If anyone is left standing, it'll be Black 47. The band is celebrating an astonishing 20 years of rocking the world with the Celtic-influenced genre it pioneered, not to mention championing various political and social issues. Known for its partying as much as its politics, Black 47 has released 13 albums on major and indie labels, toured the world and blown the genre of Celtic rock wide open for many a band to follow.

Now, two years after the release of its provocative album, IRAQ, hailed by Rolling Stone as ?an important document, more a prayer than a protest,? Black 47 returns with its 14th release, Bankers and Gangsters. The band employs its distinctive ever-broadening m?lange of New York styles - rock, reggae, hip-hop, folk, Irish traditional, downtown noise, jazz and blues ? on this celebratory eclectic mix highlighted by some top-shelf storytelling. The new songs range from the rocking socio-political commentary of ?Long Hot Summer? and ?Bankers and Gangsters? through humorous scenarios like ?Long Lost Tapes of Hendrix? and ?Izzy's Irish Rose? to the classic pop songwriting and romantic nostalgia of ?Yeats and Joyce? and ?That Summer Dress.?

?This time it was more about creating a balance between the joyous and the thoughtful,? said front man Larry Kirwan. ?Really focusing on the rhythm section and coming up with innovative arrangements for the brass and pipes. After immersing myself in IRAQ it was a blast to catch the humor in the old Lower East Side friction between Jewish and Irish in ?Izzy,' or the plight of a wily Yank who seeks to steal the long lost tapes of Jimi Hendrix from the sex-starved ladies of West Cork ? a true story, I might add. It was also nice to tip the cap to old friends like Hilly Kristal, Lester Bangs and Staten Island Danny in Long Hot Summer."

As ever Black 47 has its finger on the pulse of the country with a title track commenting on the ongoing financial crisis and employing the band's trademark black humor. Bound to be a party favorite, ?Celtic Rocker? combines Irish Reels and Kinks power chords in the coming of age saga of a lady addicted to the burgeoning Celtic Rock sub-culture. Nor does Kirwan stint on Irish politics and history. ?Rosemary (Nelson),? ?Red Hugh? and ?B?s In ?ireann? resurrect righteous figures including Civil Rights lawyer Nelson murdered in 1999. Kirwan's talent for storytelling is evident on ?Red Hugh,? a tale of intrigue and paranoia. ?Oddly enough, I was only able to nail the song when I noticed the similarities between O'Donnell and Ahmad Shah Massoud, the assassinated leader of Afghanistan's Northern Alliance,? said Kirwan.

Slated for release March 2, 2010 on United For Opportunity, Bankers and Gangsters comes on the heels of the February 23 publishing date for Kirwan's new novel ?Rockin' The Bronx,? an immigrant tough-love story set in 1980-82, circa the deaths of John Lennon and Bobby Sands. Black 47 will be touring through 2010 with a heavy concentration on March for the album release and St. Patrick's Day celebrations.

ABOUT BLACK 47: Taking their name from the worst year of the Irish Potato Famine, Black 47 burst onto the American scene in 1993 with its single, Funky C?il? from the CD, Fire of Freedom. The band's signature eclectic sound, socio-political lyrics and off-the-wall live shows paved the way for other Irish influenced bands such as Flogging Molly and Dropkick Murphys. The band's songs have long been used in political science and history courses in hundreds of high schools and colleges throughout the US.

Black 47 is led by Larry Kirwan (guitar/vocals). He has written ten plays and musicals produced in the US and Europe; five published under the title Mad Angels. Kirwan's novel, Liverpool Fantasy, an alternate history of the Beatles, received much critical acclaim and has been translated into Spanish, Greek and Japanese. His memoir, Green Suede Shoes, was published in both the US and UK. He has recorded two solo albums, Kilroy Was Here and Keltic Kids. He hosts the popular Celtic Crush for SiriusXM Satellite Radio, and writes a controversial weekly column for the nationally distributed Irish Echo newspaper.

Geoffrey Blythe (saxophones) was a founder member of Dexy's Midnight Runners Fred Parcells (trombone) has worked extensively in Latin/Jazz and big bands. Thomas Hamlin (drums) is a veteran of the Max's/CBGB's scene. Joseph Mulvanerty brings a rare jazz and blues flare to the uilleann pipes and various flutes; while Joseph ?Bearclaw? Burcaw offers a wealth of funk/R&B experience as well as a dynamic stage presence.

Trouble In The Land

Home Of The Brave