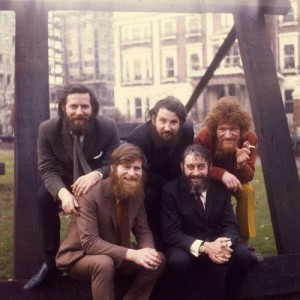 The Dubliners started off in O'Donoghue's pub in Dublin, Ireland in 1962 under the name of "the Ronnie Drew Folk Group". Then they were four, Ronnie Drew (vocals and guitar), Luke Kelly (vocals and 5-string banjo), Barney McKenna (tenor banjo, mandolin, melodeon and vocals) and Ciar?n Bourke (vocals, guitar, tin whistle and harmonica). In 1963, they played at the Edinburgh festival where they met the head of Transatlantic Records, Nathan Joseph, for whom they started recording.

In 1964, Luke Kelly left, and Bobby Lynch (vocals and guitar) and John Sheahan (fiddle, tin whistle, mandolin, concertina, guitar and vocals) were added. When Luke Kelly returned and Bobby Lynch left in 1965, we have what is considered as the original Dubliners, five individualists, five men whose talents were mixed together in a superb blend and just wanted to play and have a good craic. If they only knew what was awaiting them!

In 1967 their major breakthrough came as a result of a coincidence. Their song, "Seven Drunken Nights" which was recorded in one take, was snapped up by a pirate radio station which started playing it along with The Beatles, The Mamas & the Papas, The Who, The Kinks and Jimi Hendrix. Suddenly, The Dubliners was a major band, playing all over the world, getting into the charts, and receiving gold discs. Not what you expected from a bunch of hairy people who "looked like they'd just been dragged out of a seedy bar via a hedge(backwards) and dropped on London from a very great height".(Colin Irwin in the reissue of "Live at the Albert Hall")
The seventies started like the sixties ended; wild touring, drinking, playing. They started doing regular tours, and they were still recording, of course. Then, in 1974, Ciar?n Bourke collapsed on stage with a brain haemmorrage, which eventually led to his death. He first, though, recovered remarkably , and was back on stage with The Dubliners, but collapsed again. At the same time, Ronnie decided to take a break, and Jim McCann took his and Ciar?ns place in the group.

In 1979, Ronnie decided to make a comeback as a member of the group, although he probably never really left it. In the five years, he had recorded two solo albums, and The Dubliners three albums. With Ronnie returning, Jim left, and The Dubs were almost back where they started. Then Luke Kelly became ill, he collapsed on stage with a brain tumour, for which he received surgery several times. He too, made remarkable recoveries, and went on touring with the Dubliners, at the same time continuing his wild and unhealthy lifestyle. Se&aacute;n Cannon, a long time friend, stepped in for Luke, when he couldn't be on stage. Se?ns appearence wasn't that well received by the audiences at the beginning, but he has later turned out to be an important addition to The Dubliners, and their repertoir. In 1984, Luke Kelly died, but The Dubliners, now with Se?n Cannon as a member, decided to keep on.

1987 turned out to be one of the best - and busiest - years for the Dubliners. Their long time friend, and guest musician, Eamonn Campbell, brought the group together with The Pogues on the hit single [track]the Irish Rover[/track]. This single took the Dubliners back to the charts, and also gave them a completely new audience; people who weren't even born when The Dubliners started off. And with Dublin celebrating its milennium in 1988, The Dubliners also received more attention than for years. Eamonn Campbell joined them on regular basis, a move which has turned out to be one of the most important in their history. In 1988 Ciar?n Bourke died, after years of pain and difficulties. He always was, and still is very much remembered by The Dubliners, just like Luke Kelly is.

The eighties finished off with rumours that The Dubliners were to retire, probably something that's always been following the group. However, they didn't, and celebrated their 30th anniversary in 1992, with a double cd and extensive tour. The nineties have later brought a tour video from the German tour 1995, and the "shock" news that Ronnie Drew was leaving. He left in December 1995, after releasing a superb album, "Dirty Rotten Shame" a few months earlier.

Now, even the most optimistic Dubliners fans thought it was the end, but the remaindours decided to convince Paddy Reilly to join them, and they continued their busy touring and recording schedule. This move has also turned out to be excellent. Paddy, not very well known in Europe, had never been touring there, so he too enjoyed the experience, as well as being part of a band. He still, though, does tours in the USA in the winter and summermonths.

As we reach the start of a new milennium, we might as well prepare ourself for the Dubliners 5th decenninum, and although we know that they won't go on very much longer, and that they are no longer the best band in the world, they are still a very high class act. People probably don't recognize what The Dubliners have meant to the world of music. By the way, not only the world of music, but the world as a whole. They have first of all paved the way for dozens of bands from Ireland and Scotland, like The Chieftains, The Pogues, U2, Ossian, The Fureys and so on. The number of artists that list The Dubliners as one of their major influences and idols, is endless. They have brought folk music to millions of people all over the world, people who never would have been interested at all. That isn't only because of the folk music, the instrumentals alone, it's because of The Dubliners, their astonishing voices, their undescribable instrumentals, the wild life style and drinking, late sessions, their enormous beards, their extensive touring, their charisma and characters. It was, and still is to a certain extent, a blend the world will never see again.

Too Late To Stop Now: The Very Best Of The Dubliners

spirit of the irish