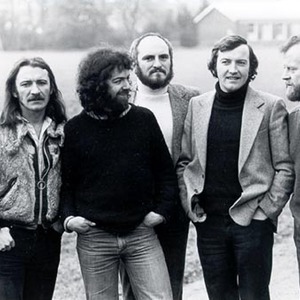 In 1972 Christy Moore released his second album Prosperous, which he recorded with his old schoolmates, Lunny, Irvine, and O'Flynn. After recording Prosperous, they formed Planxty. The group's first major performance, opening for Donovan in Galway, was a great success. Neither the audience nor the band knowing what to expect, both were pleasantly surprised. Irvine, unable to see the audience through the lighting, was worried that the crowd was on the verge of rioting. It took him several minutes to realize what he was hearing was enthusiasm. (On the 2004 retrospective, The Christy Moore Box Set, a rough quality recording of the song "Raggle Taggle Gypsy" was included, complete with audience's reaction.)

A formative influence on Planxty and in particular on Christy Moore was the singing of Irish Traveller John "Jacko" Reilly who hailed from Boyle, Co. Roscommon. It was from Reilly that Moore learned "The Raggle Taggle Gypsy", which was recorded on the first Planxty album, in addition to "The Well Below the Valley" and "As I Roved Out", which appeared on The Well Below the Valley. Christy later dipped into Reilly's songbook again for an updated version of the lengthy ballad "Lord Baker", which was featured on Planxty's 1983 album Words & Music.

Planxty released the highly acclaimed single, "The Cliffs of Dooneen, after which they were promptly signed to an exclusive contract in conjunction with Polydor Records. The band members, inexperienced in the world of business, signed a contract for ?30,000, but for six albums, and with a low royalty percentage. (They were never to make much money from album sales, and were substantially in debt by the time the group dissolved.)

The group became very popular in the next few years in Ireland, Britain and Europe, and they recorded two more albums in the following two years. After that they split up, and a compilation called The Planxty Collection was released. As time passed, the personnel changed - Johnny Moynihan replaced D?nal Lunny in July of 1973, and Paul Brady stepped in for Christy Moore in 1974.

Christy, Andy, D?nal, and Liam, the original lineup, reformed Planxty in 1979. They recorded three albums, and made several changes and additions to their lineup, most notably the joining of Matt Molloy, flautist from the Bothy Band, later with The Chieftains.

In 1983, D?nal Lunny and Christy Moore left to concentrate on Moving Hearts, and Andy and Liam started pursuing solo careers (the former in the band Patrick Street). The band broke up for the final time.... or so it seemed. A low-key gig in Lisdoonvarna led to gigs in Dublin and County Clare in 2004, and the release of Live 2004 on DVD and CD. It remains to be seen if this is a new lease of life. Broadcaster and journalist Leagues O'Toole documented the band in the biography The Humours of Planxty, which was published by Hodder Headline in 2006.

One Night In Bremen (Live)

The Woman I Loved So Well

Cold Blow And The Rainy Night