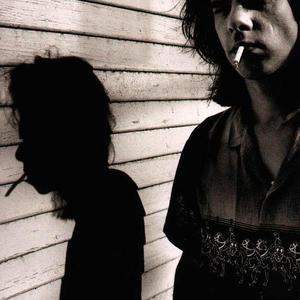 Nicholas Edward Cave (born 22 September 1957) is an Australian rock musician, songwriter, poet, author, actor and screenwriter, best known for his work with his band Nick Cave and the Bad Seeds, post-punk band The Birthday Party, and Bad Seeds side project, Grinderman. He currently resides in Hove, UK. Cave was born in the small town of Warracknabeal in the state of Victoria, Australia, to Dawn and Colin Cave. He has two brothers: Tim (b. 1952) and Peter (b. 1954), and a sister, Julie (b. 1959).

As a child, Cave lived in Warracknabeal and then Wangaratta in rural Victoria, Australia. His father Colin was an English teacher and administrator, with a love of literature, and his mother was a librarian. Raised as an Anglican, Cave sang in the boys choir at Wangaratta Cathedral. However, he was often in trouble with the local school authorities, so his parents sent him to boarding school at Melbourne's Caulfield Grammar School in 1970. Cave joined the school choir under choirmaster Norman Kaye, and also benefitted from having a piano in his home. The following year he became a "day boy" when his family moved to Caulfield, a suburb of Melbourne.

After his secondary schooling, Cave studied painting (Fine Art) at the Caulfield Institute of Technology (now Monash University, Caulfield Campus) in 1976, but dropped out in 1977 to pursue music. He also began dabbling in heroin use around this time. In late 1978, shortly after Cave's 21st birthday, his father was killed in a car accident. This affected him deeply, as is evident in his lyrics.


In 1973, Cave met Mick Harvey (guitar), Tracy Pew (bass) and Phill Calvert (drums); fellow students at Caulfield Grammar. With them he founded his first band, with himself as singer. Their repertoire consisted of proto-punk cover versions by Lou Reed, David Bowie, Alice Cooper, Roxy Music and Alex Harvey. In 1977, after leaving school, they adopted the name The Boys Next Door and began playing predominantly original material penned by Cave. Guitarist and songwriter Rowland S. Howard joined the band in 1978.

From 1977 until their dissolution in 1984 the band explored various punk styles, often with rapid development: from Ramones riffing; through Bowie-esque new wave; on to Post-punk expressionism (informed by Pere Ubu); and then a malevolent mix of Stooges-esque audience provocation, brooding art-rock and noise.

The Boys Next Door were a part of Melbourne's post-punk music scene in the late 1970s, playing hundreds of live shows in Australia before changing their name to the Birthday Party in 1980 and moving to London, then West Berlin. Cave's Australian girlfriend and muse Anita Lane accompanied them to London. The band were notorious for their provocative live performances which featured Cave shrieking, bellowing and throwing himself about the stage, backed up by harsh music.

Cave and Harvey went on to form the first version of Nick Cave & The Bad Seeds. This name indicates the shift in Cave's role from band-member to band-leader, and coincides with a shift in Cave's songwriting from expressionism towards lyrical and detailed narratives. The Bad Seeds were founded as an international backing group with German guitarist Blixa Bargeld (from Einst&uuml;rzende Neubauten), English bassist Barry Adamson (formerly of Magazine) and Australian guitarist Hugo Race. Lane was also a creative influence and sometime lyricist. This line-up recorded their debut album, released in 1984, From Her to Eternity.

Cave separated from Lane in the mid-1980s and began a relationship with Elisabeth Recker. While in Berlin, he released four albums with the Bad Seeds: The Firstborn Is Dead; Kicking Against the Pricks; Your Funeral, My Trial; and Tender Prey.

While he was based in West Berlin, Cave started working on what was to become his debut novel, And the Ass saw the angel (1989). Significant crossover is evident between the themes in the book and the lyrics Cave wrote in the late stages of the Birthday Party and the early stage of his solo career. "Swampland", from Mutiny, in particular, uses the same linguistic stylings ('mah' for 'my', for instance) and some of the same themes (being hunted like an animal, approaching death and execution).

After completing And the Ass Saw the Angel, Cave left West Berlin shortly before the fall of the Berlin Wall and moved to S?o Paulo, Brazil, where he met Brazilian Viviane Carneiro. The two have a son, Luke (b. 1991), but never married. Cave has another son born in 1991, Jethro (named after one of his favourite bands Jethro Tull), who lives with his mother (Beau Lazenby) in Australia. [1]. In 1993, Cave moved back to London.

In 1996, Cave and the Bad Seeds released Murder Ballads, a collection of songs about murder. It includes "Henry Lee," a duet with British rock singer PJ Harvey (with whom he had a brief relationship), and "Where the Wild Roses Grow," a duet with Australian pop idol Kylie Minogue. The latter was a mainstream hit in Australia, winning three ARIA Awards including "Song of the Year".

His next album, The Boatman's Call (1997), is marked by a radical shift away from archetypal and violent narratives to biographical and confessional songs about his relationships with Carneiro and PJ Harvey. It was also his first full album to be centred around his own piano playing.

Cave then took a hiatus to rehabilitate from his heroin and alcohol usage over the past twenty years. During this time, he met his current partner, British model Susie Bick. They married in summer 1999, and had twins, Arthur and Earl, shortly after.[2] [3]Rejuvenated, Cave resurfaced with the complex, moody, and much-acclaimed No More Shall We Part with the Bad Seeds in 2001.

After the release of the 2003 album Nocturama, which failed to excite reviewers, Bargeld announced he was leaving the Bad Seeds to devote more time to Einst?rzende Neubauten, leaving Mick Harvey as the only original member still in the band, other than Cave himself. Undisturbed, the next year Cave released his first double record - the acclaimed two-disc set Abattoir Blues/The Lyre of Orpheus.

In 2005, Cave and the Seeds released B-Sides & Rarities, a comprehensive three-disc, 56-track collection of B-sides, rarities and tracks that appeared on film soundtracks.

And, as witnessed by their live performances, they continue the story of doom and despair, on a violin, a banjo, drum, bass, and vox.

In march 2008 his new album Dig Lazarus Dig came out.

From Her to Eternity

The Secret Life Of The Love Song (CDS)