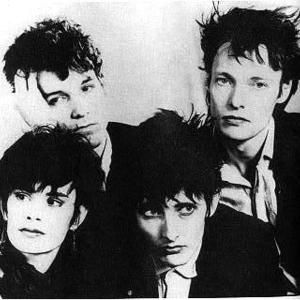 These Immortal Souls were an Australian band of Melbourne expats in Germany: Rowland S. Howard (guitar and vocals), Genevieve McGuckin (keyboards), Epic Soundtracks (drums) and harry howard (bass). The band formed in Berlin in 1987 when McGuckin joined the three ex-members of Crime And The City Solution. Their first single, "Marry Me (Lie! Lie!)", and debut LP, Get Lost (Don't Lie!), were released the same year.

Their first single, "Marry Me (Lie! Lie!)", and debut LP, Get Lost (Don't Lie!), were released the same year. Howard, McGuckin and Lydia Lunch also collaborated on the album Honeymoon In Red in 1982. It was released on Lydia Lunch's Widowspeak label in 1987 and featured ex-Birthday Party members Tracy Pew, Mick Harvey and Nick Cave. These Immortal Souls remained quiet until 1992, when the single "King Of Kalifornia" and the I'm Never Gonna Die Again LP were released.

After Rowland, Harry and Genevieve returned to Australia in 1995, the band played a few more shows with a different drummer. The band's final show was at the Greyhound Hotel, St. Kilda, on July 23rd 1998, with Lydia Lunch.

Kevin Paul Godfrey a.k.a. Epic Soundtracks, the outstanding drummer for These Immortal Souls was found dead in his London apartment on November 5, 1997, shortly after a relationship break-up, a successful tour and the release of the third of his accomplished solo albums. The cause of death was not determined despite an autopsy.