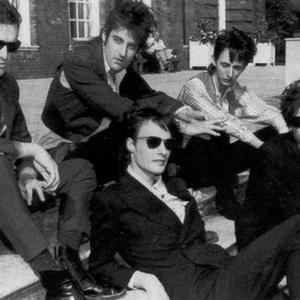 For a complete list of the different line-ups see below.

In 1985, the quartet debuted on record for the first time with The Dangling Man E.P., a self-produced EP quickly establishing the band's moody, atmospheric blues-based aesthetic. Former Swell Maps drummer Epic Soundtracks joined Crime after the EP's release, freeing Harvey to alternate among a variety of instruments for the haunting follow-up, Just South of Heaven. Their full-length bow Room of Lights appeared in 1986 and featured the remarkable "Six Bells Chime", which so impressed acclaimed filmmaker Wim Wenders that he invited the band to perform the song live in his 1988 masterpiece Wings of Desire.

By the time the film appeared, however, the incarnation of Crime & the City Solution presented onscreen was no more; after Room of Lights, the Howard brothers and Soundtracks exited to form These Immortal Souls, leaving Bonney, Harvey and violinist Bronwyn Adams (also Bonney's wife and songwriting partner) to relocate to Berlin, where they recruited a number of local musicians, including Einst?rzende Neubauten guitarist Alexander Hacke, to cut 1988's ornate, intoxicating Shine. Even more baroque was the follow-up, 1989's The Bride Ship.

In 1990, Crime returned to the studio one final time to record Paradise Discotheque, a record built around Bonney's ambitious four-part suite "The Last Dictator", a song cycle inspired by the downfall of Romanian warlord Nicolae Ceaucescu. After contributing "The Adversary" to the soundtrack of Wenders' Until the End of the World, Crime & the City Solution disbanded; while Harvey rejoined former Birthday Party mate Nick Cave in the Bad Seeds, Bonney began work on his 1992 solo debut, Forever.