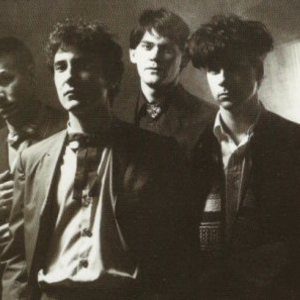 Wall of Voodoo had its roots in Acme Soundtracks, a film score business started by Stan Ridgway, later the vocalist and synth player for Wall of Voodoo. Acme Soundtracks office was across the street from the Hollywood punk club The Masque and Ridgway was soon drawn into the emerging punk/new wave scene. Marc Moreland, guitarist for The Skulls began jamming with Ridgway at the Acme Soundtracks office and the soundtrack company morphed into a New Wave band. In 1977, with the addition of Skulls members Bruce Moreland (Marc's brother) as bassist and Chas Gray as keyboardist, along with Joe Nanini, who had been the drummer for Black Randy and the Metrosquad, the first lineup of Wall of Voodoo was born.

Wall of Voodoo released a self-titled EP in 1980 which featured a unique, synthesizer-driven cover of the Johnny Cash song, "Ring Of Fire". The band's first full-length album, Dark Continent followed in 1981. Bruce Moreland left the band for the first time soon after this, and Chas Gray performed on both bass and keyboard during this time. The band recorded their biggest-selling album, Call Of The West in 1982. The track "Mexican Radio" was their only Top 100 hit and the video for the song got a great deal of exposure on the newly-formed MTV. Bill Noland was added as a keyboardist soon after the release of this album.

Stan Ridgway claims that the situation around the band was increasingly chaotic at the time, with a great deal of drug use and out-of-control behavior on the part of the band members, as well as shady behavior by the band's management and record label. Wall of Voodoo appeared at the second US Festival on May 28, 1983 (the largest concert the band had performed), immediately after which Ridgway, Nanini, and Noland all left the band. Stan Ridgway soon went on to a successful solo career, appearing as guest vocalist on a track on the Rumble Fish score and releasing his first solo album in 1986. Joe Nanini soon resurfaced in the country rock band Lonesome Strangers.

The remainder of the band, Marc Moreland, Chas Gray, and a returning Bruce Moreland carried on under the name Wall of Voodoo. Soon after, Andy Prieboy, formerly of the San Francisco New Wave band Eye Protection, joined as singer and Ned Lukhardt was added as drummer. The band continued to record and perform under this lineup until 1988, though their sound was very different from the style of music they played in the earlier Stan Ridgway-fronted lineup. In 1988, they split up and Andy Prieboy and Marc Moreland went on to solo careers. During this period, the entire membership of Wall of Voodoo (with the exception of Andy Prieboy) were also members of Nervous Gender, a lineup that was nicknamed "Wall of Gender".

Their influence has reached an interesting and eclectic range of artists, for example Swiss Death/Thrash Metal Band Celtic Frost covered "Mexican Radio" on their album "Into The Pandemonium"

Lost Weekend: The Best Of Wall Of Voodoo The I.R.S. Years

The Ugly Americans In Australia

Far Side Of Crazy (EP)

Call Of The West