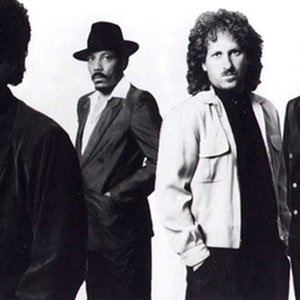 Was (Not Was) is an eccentric pop group founded by David Weiss (a.k.a. David Was) and Don Fagenson (a.k.a. Don Was). (Don Was is also a famous producer, who has worked with The B-52's, Rolling Stones and many other artists.) Weiss and Fagenson were childhood friends who grew up together in suburban Detroit. Due largely to Fagenson's poverty, they decided to form Was (Not Was) in 1979. The name of the band was derived from Fagenson's son, who enjoyed contradicting words such as 'Blue' with 'Not Blue'.

Weiss and Fagenson were childhood friends who grew up together in suburban Detroit. Due largely to Fagenson's poverty, they decided to form Was (Not Was) in 1979. The name of the band was derived from Fagenson's son, who enjoyed contradicting words such as 'Blue' with 'Not Blue'. Their first recording was "Wheel Me Out", a 12-inch dance record for the avant-garde Ze Records.

Their first album 'Was (Not Was)' (1981) was an amalgam of rock, disco, Weiss's beat poetry, Reagan-era commentary and jazz. On vocals they recruited Harry Bowens and "Sweet Pea" Atkinson, who proved to be distinctive, very soulful front-men, who frequently found themselves singing absurd, surreal songs alongside tender ballads. The MC5's Wayne Kramer (guitar) and The Knack's Doug Feiger (vocal) were guest players.

Born to Laugh at Tornadoes (1983) introduced even more guest musicians, including Ozzy Osbourne rapping over electro, Mel Torme crooning an oddly beautiful ballad and an abstract funk piece "Man Vs the Empire Brain Building". The band were shortly dropped from their record label.

In 1987, they found their biggest hit with the album What Up, Dog?, along with the singles "Walk The Dinosaur" and "Spy in the House of Love". Special guests include Stevie Salas, John Patitucci, Frank Sinatra Jr. and a writing credit for Elvis Costello. About this time, the Was Brothers developed separate careers as producers, film scorers and music supervisors.

They followed up with Are You Okay? in 1990, a critically lauded album, spearheaded by a cover of Papa Was a Rolling Stone. Guest musicians were Iggy Pop, Leonard Cohen, The Roches and Syd Straw. After a tour with Dire Straits in 1992 and a Dance Hit Single "Shake Your Head", Weiss and Fagenson drifted apart and nothing was heard from Was (Not Was) but a compilation album Hello Dad... I'm In jail. Around this time, artist/animator Christoph Simon created videos to accompany some of their songs, such as "What Up Dog", "Dad I'm In Jail" and the Tom Waits-style "Earth to Doris". These have appeared on MTV's Liquid Television.

In 1997, Steve Winwood released a tune which borrowed not just the title of Was (Not Was)'s single "Spy In the House of Love" but also the bass line and other elements. However, no lawsuits ensued (or were settled out of court.)

In late 2004, Was (Not Was) re-formed and were back on stage for a two-month club tour through the Northeast and East Coast of the US, as well as California, Missouri, Ohio, Illinois (including stops at the House of Blues in Cleveland and Chicago), Maryland, New York, and Pennsylvania (in the Trocadero in Philadelphia).

In October 2005, they played four gigs at the Jazz Caf? in London.

Detroit's Metro Times has described the band as "an endearing mess... ...a sausage factory of funk, rock, jazz and electronic dance music, all providing a boogie-down backdrop for a radical (and witty) political message of unbridled personal freedom and skepticism of authority."

In 2008, after hiatus of 20 years, Was (Not Was) finally released another studio album: " Boo ! " Some tracks were originally recorded in the 80's. Tracklists differ between the UK and US pressings, but for those who "get" this monster motown mongrel's killer musicianship, pop edge and inane lyrics, it is all eagerly welcomed.

Out Come the Freaks

Papa Was A Rolling Stone (VLS)