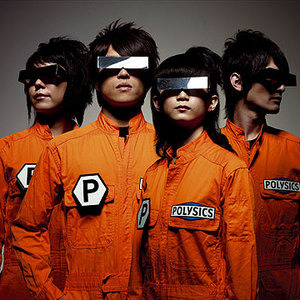 POLYSICS is a Japanese new wave/synth pop/punk/rock band, hailing from Tokyo. The band started in 1997, but got their big break in 1998 at a concert in Tokyo. They create high energy music, fusing conventional guitar music, with synthesized and computer generated sound to create a unique mixture of punk and electro-pop. Their song lyrics often consist of Japanese, English, or just plain gibberish. The band has been noted for their extremely energetic live performances and their wild gimmicky outfits.

Since 1999 POLYSICS have released several albums. The albums 1st P and A.D.S.R.M! were released on the independent label DECKREC Records. Just after the release of 1st P their bassist, known only as "POLY-2", left. The band dropped the "POLY-X" names, and reduced to a trio, with new member Fumi on Bass Support on some of the tracks from Neu. In 1999, Asian Man Records released their US Debut album, Hey! Bob! My Friend to rave reviews, but weak sales. The album was a compilation of tracks from their first two Japanese releases. In 2000, POLYSICS signed to Ki/oon Records (a subsidiary of Sony Music Entertainment (Japan) Inc.) and released their first major album Neu. The album carried with it the same manic energy as their independent releases but more refined. On the 2001 album Eno, Synthesizers became more prevalent in the mix, but the songs still had an intense punk-like energy. For this album, Fumi returned to the band as a full member, returning POLYSICS to a quartet. 2002 saw the release of the album FOR YOUNG ELECTRIC POP, POLYSICS attempt at a pop album. The manic punk energy was minimized, but the band showed it had an amazing sense of harmony and style. The songs "Black Out Fall Out" and "Code 4" from this album are very emotional.

In 2003, drummer Junichi Sugai left the band after recording the Kaja Kaja Goo EP. For the 2003 album National P, Ishimaru joined on Drum Support, returning POLYSICS to a trio. Also in 2003, Neu was released on Asian Man Records in the United States to rave reviews and great sales. POLYSICS came to the US to tour, which was then captured on the PippikkippippiP In USA DVD. In 2004, POLYSICS released a Best Of compilation titled POLYSICS OR DIE!!!! which contained new versions of some early POLYSICS songs. It was also released in the United Kingdom, and was the first POLYSICS album to be released in Europe. POLYSICS toured Europe and the US for the 2005 US Release of POLYSICS OR DIE!!!!. With the recent 2006 release of "Now is the time!", they are now currently touring the US and preparing for the UK tour in April. Their most recent album is KARATE HOUSE. They also released POLYSICS OR DIE!!! VISTA, which is an updated version of POLYSICS OR DIE!!! which includes tracks from Now is the Time! and KARATE HOUSE. It also includes a bonus dvd with promotional videos and a few songs from their Now is the Live! concert dvd. They toured the US in 2007 as openers on the MySpace music tour and are currently back in Japan.

The biggest influence on POLYSICS is clearly the band Devo. From the start, POLYSICS have tried to make music in, as Hiroyuki describes it, "The spirit of Devo." Obvious references to Devo have been made in POLYSICS videos, and songs. each life each end from the album Neu borrows the riff from the Devo song "Girl U Want", and the lyrics are playfully paraphrased from the songs "The Day My Baby Gave Me A Surprise" and "Red Eye Express", while "Plaster Caster" is a semi-cover of the song "Uglatto", one of their more obscure songs which was released on Hardcore Devo Vol.1 74-77. In a miniposter included with National P, POLYSICS members sit to eat cakes shaped like Devo's famous Energy Dome headgear. In addition, the giant robot mascot from the cover of POLYSICS' "Lo-Bits" EP (who also starred in the promo video for the song "Domo Arigato Mr. Roboto") sports a battle-helmet that resembles the same iconic dome.

While POLYSICS claim Devo as their most prevalent influence, other bands and artists that have influenced their music include Talking Heads, Orchestral Manouvres in the Dark, Sparks, The B-52's, XTC, King Crimson, Kraftwerk, P-Model, Neu!, Brian Eno, Nirvana, and David Bowie. POLYSICS have also covered songs by Styx, Suzi Quatro, The Plastics, The Ramones, The Knack, Soft Cell, and Frank Sinatra.

Announced in the official email newsletter December 23rd, 2009, keyboardist/vocalist KAYO will be performing her last show with the band at the Nippon Budokan on March 14th, 2010.

We Ate the Machine

Now Is the Time!