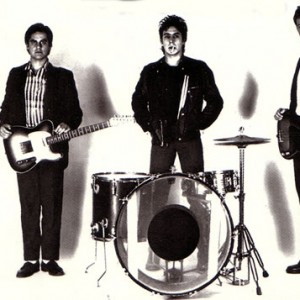 The Plugz were a punk rock band from Los Angeles, California that formed in 1978. They were one of the earlier Latino punk bands, preceded by the Zeros and Mink DeVille. (There were, however, several Latino garage rock bands that predated the Plugz, notably Thee Midniters). The Plugz melded the spirit of punk and Mexican music. The band was composed of Tito Larriva (Lead vocals/Rhythm guitar) Chalo Quintana (Drums) Barry McBride (Bass/Backing vocals) Tony Marsico (Lead guitar)

The band was formed in 1978 and was a contemporary of the bands featured in 'The Decline of Western Civilization'. Their songs reflected the anger and angst of growing up Chicano, and this was reflected in their sardonic hi-speed version of Richie Valens' "La Bamba". They were contemporaries of other Latino punk bands The Brat and Los Illegals. The Plugz have a special place in the history of L.A. punk and are generally acknowledged as being the first D.I.Y. punk band in L.A. having started their own Fatima label to release their records.

The Plugz also feature prominently on the soundtrack to the movie Repo Man. They composed original instrumental music for the film, and performed "Hombre Secreto," a Spanish version of Johnny Rivers' "Secret Agent Man." Other songs featured on soundtracks were "Adolescent" used in the 1984 independent film Scarred and "Electrify Me" was used in 1985 on the adult film New Wave Hookers.

The Plugz accompanied Bob Dylan on his appearance on "Late Night With David Letterman" on 22 March 1984 for three songs: "Don't Start Me Talkin'" (by Sonny Boy Williamson), "Jokerman", and "Licence to Kill". After their break-up, the members of the Plugz went on to form Los Cruzados.