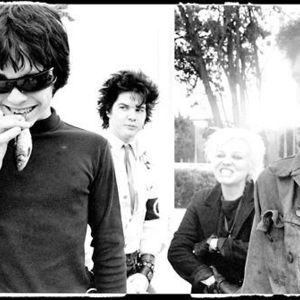 Germs were an American punk rock band formed in 1977, disbanded in 1980. Their fast spit-and-blood hardcore punk sound mixed with singer Darby Crash's (real name Jan Paul Beahm) literate and dark lyrics made them, to many, one of the distinctive bands in the early punk scene. They disbanded when Crash, after long bouts with drug addiction and self-destructive behavior, committed suicide at age 22 on December 7, 1980. The Germs' 1977 single, "Forming"/"Sexboy" (live), is generally regarded as the first punk record from Los Angeles, CA.

The band started when Jan Paul Beahm and Georg Ruthenberg decided they should start a band after being kicked out of University High for antisocial behaviour, allegedly for using 'mind control' on fellow students. They named themselves "Sophistifuck & The Revlon Spam Queens," with Beahm (then 'Bobby Pyn,' and later Darby Crash) on vocals, Ruthenberg (then and later called Pat Smear) on guitar, an early member called Dinky on bass, and Michelle Baer playing drums. This lineup never played live.

In April '77 the band featured its final bassist, Lorna Doom, with transitional member Dottie Danger on drums, later famous under her own name as Belinda Carlisle of The Go-Go's (Carlisle never played live, due to her being sidelined by a bout of mononucleosis for an extended period, although she can be heard introducing the band on the Live At The Whiskey recording), and was soon replaced by Donna Rhia, who played three gigs and recorded their first single. Nicky Beat, of various noteworthy LA bands, then sat in for a time. Their most consistent drummer has been Don Bolles, who has also acheived notoriety with a diverse array of bands including 45 Grave, Vox Pop (and he also appears nude on a Vox Pop album cover), Nervous Gender, and many others.

Despite drawing on musical influences including Iggy Pop, Suzi Quatro, The Runaways, and New York Dolls, the Germs began as an objectively pathetic musical outfit. The first single, "Forming", was recorded on a Sony 2-track in Pat's garage and arrived back from the pressing plant with the note, "Warning: This record causes ear cancer" printed on the sleeve by the plant staff, much to the band's displeasure. It featured a muddy live recording of "Sexboy" on the B side, recorded at the Roxy for the Cheech And Chong movie, Up In Smoke, -- although the song was not featured in the movie. Neither was the band, the only one not to be called back to perform live in the "battle of the bands" sequence, mostly due to the fact that The Germs' anarchic performance included a full-on food fight.

The Germs, despite all expectations, slowly developed a sound that was extremely aggressive, hyper-competent, and highly influential -- although throughout their career, they would have a reputation as a chaotic live band. Singer Darby Crash often arrived onstage nearly incoherent from drugs, singing everywhere but into the microphone and taunting the audience between songs. The other band members had similar problems, with many contemporary reviews citing collapses, incoherency, and drunken vomiting onstage.

The final drummer - Don Bolles - was, however, extremely technically adept (some sources claiming him to be the greatest drummer in the history of Punk), and the amateurish bass stylings of Lorna Doom became, through rehearsal, an undeniably tight, complex counterpoint. Smear was revealed as a remarkably talented and fluid player, while the songwriting began to be cited as art and poetry. The canonical lineup of the band was often accused of willfully skirting the boundary between genius and disaster. Crash's vocals had begun to mold themselves around the style of The Screamers' vocalist Tomata DuPlenty (The Screamers, a huge LA live attraction at the time, never released a record, but covered the Germs song, 'Sex Boy,' at live shows, recordings of which are now widely available on bootleg.)

The Germs recorded two singles (with alternate tracks), an album-length demo session, and one full-length LP, [album](GI)[/album], each more focused and powerful than the last. Crash was, despite his erratic behavior, generally regarded as a brilliant lyricist (a contemporary critic described him as "ransacking the dictionary"), and the final lineup of Smear, Doom, and Bolles had become a world-class rock ensemble by the recording of (GI), turning in a performance that spurred an LA Weekly reviewer to write, "This album leaves exit wounds." It is considered one of the first hardcore punk records, and has a near-mythic status among alternative rock fans.

The album was produced by Joan Jett of The Runaways. Some European copies of the album also credit Darby's friend, Donny Rose, on keyboards (the song, "Shut Down," was recorded live in the studio, and has a track of amelodic, two-fisted piano).

The Germs are featured in Penelope Spheeris's documentary film The Decline of Western Civilization along with X, Black Flag, Alice Bag Band and Catholic Discipline.

Following the release of their solo studio album, (GI), The Germs recorded six original songs with legendary producer Jack Nitzsche for the soundtrack to the film, Cruising, starring Al Pacino as an undercover cop looking for a murderer in New York's homosexual underground nightclubs. Only the song, "Lion's Share," ended up on the Columbia soundtrack LP -- it was featured for about a minute in the movie, during a video booth murder scene in an S&M club. Other songs from this session appeared on a contemporary punk compilation LP, Tooth and Nail, and the rest of the songs later surfaced on the CD (MIA): The Complete Recordings.

Crash committed suicide in 1980, at age 22, for reasons unreported at the time. Beahme overdosed on heroin under a sign taped to the wall, reading, 'Here Lies Darby Crash.' His death was largely overshadowed by John Lennon's murder the next day.

After The Germs ended Don Bolles played with several other seminal L.A. bands, including Nervous Gender and 45 Grave. Pat Smear went on to play with Nirvana and, after the death of Kurt Cobain, with the Foo Fighters.

A movie about The Germs, What We Do Is Secret, was released in 2007. Since the film, the surviving band members have toured with actor Shane West (who played Darby Crash in the film) taking over on vocals as Shane Wreck.