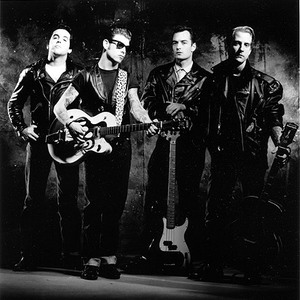 Social Distortion temporarily disbanded in 1985, due to frontman Ness' drug addiction and troubles with the law, which resulted in extended stints in various rehabilitation centers, that lasted for two years. However, the band reformed around 1986 and has remained active since then, even after the death of longtime guitarist Dennis Danell, who succumbed to a brain aneurysm in 2000. Since its inception the band lineup has been a virtual revolving-door of talent, with many members coming and going ? Ness being the only constant member.

To date, Social Distortion has released seven full-length studio albums, two compilations, one live album, and two DVDs. The band released its debut album, Mommy's Little Monster, in 1983, which was quite popular in the United States. Social Distortion did not release a second album, Prison Bound, until 1988. That album attracted the attention of Epic Records, who signed the band in 1989 and issued their highly successful self-titled third album a year later, which peaked at number 128 on the Billboard 200, and featured their well-known hit singles "Ball and Chain," "Story of My Life," and the cover of Johnny Cash's "Ring of Fire." The next two albums, Somewhere Between Heaven and Hell and White Light, White Heat, White Trash were also well-received but not as successful as the self-titled album. Social Distortion released thier sixth studio album, Sex, Love and Rock 'n' Roll, on September 28, 2004. The band also released their first Greatest Hits compilation on June 26, 2007. And finally, the seventh and most recent studio album, Hard Times and Nursery Rhymes, was released on 18 January 2011. The band has appeared on television programs like Jimmy Kimmel and WWE promoting their newest sucess, "Machine Gun Blues" .

Live At The Roxy

Mainliner: Wreckage From The Past

Somewhere Between Heaven And Hell