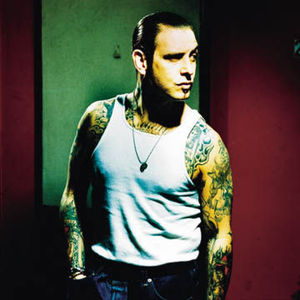 Mike Ness (born Michael James Ness, born April 3, 1962) is a country music singer and guitarist, best known as the vocalist, guitarist, and chief songwriter for the American punk rock band Social Distortion. Ness was born in Stoneham, Massachusetts and raised in Fullerton in Orange County, California. Kicked out of his parents' home in Fullerton at the age of fifteen, he dabbled in drugs and petty crime, involving himself in the punk scene and founding Social Distortion in 1978. The band signed a contract with Posh Boy Records in 1981, releasing the Mainliner/Playpen 7" record.

Ness was born in Stoneham, Massachusetts and raised in Fullerton in Orange County, California. Kicked out of his parents' home in Fullerton at the age of fifteen, he dabbled in drugs and petty crime, involving himself in the punk scene and founding Social Distortion in 1978. The band signed a contract with Posh Boy Records in 1981, releasing the Mainliner/Playpen 7" record. Then the band moved to 13th Floor Records in 1982 and released the album Mommy's Little Monster (1982).

By this time, Ness's drug addiction and self-destructive behavior had deepened to the point that the band almost broke up. The turmoil was captured on a video, Another State of Mind, which chronicled a cross-country tour. Five years passed before Social Distortion released their next album, 1988's Prison Bound, on Restless Records but Ness emerged from the time off free of his addictions and ready to work.

In 1989, Social Distortion signed a deal with Epic Records and released four albums with that label: the self-titled album (1990), Somewhere Between Heaven and Hell (1992) and White Light, White Heat, White Trash (1996).

The band left Epic Records after White Light, White Heat, White Trash (1996) and joined Time Bomb Recordings, releasing Mainliner: Wreckage From the Past (a collection of old recordings and singles that were done in the early '80s) and Live at the Roxy (1998).

In 1999, Ness released his first solo album, Cheating at Solitaire. Although Social Distortion's music had contained country inflections as far back as Prison Bound, Cheating at Solitaire was an unalloyed expression of Ness's country side. 'Solitaire' included guest appearances by rock icon Bruce Springsteen, former Stray Cat Brian Setzer and drumming legend Josh Freese as well as members of Royal Crown Revue. Springsteen had touted Social D's 'Heaven and Hell' as his favorite record of the year in a Rolling Stone interview in 1992. Ness continued in this vein, releasing a compilation of country covers entitled Under the Influences that same year. Both albums came out on Time Bomb Recordings. Ness toured extensively in the U.S. in support of these albums, backed partially by the present-day (2006) incarnation of Social Distortion; Charlie Quintana (drums) Brent Harding (standing & electric bass) and Johnny Wickersham (guitar tech). Ness and the band played at Woodstock '99. After that, his bandmate and guitarist Dennis Danell died on February 29, 2000 due to an aneurysm, but Social Distortion did not completely disband.

In 2004, Social Distortion came back with a live DVD called "Live In Orange County," and then recorded an album titled Sex, Love and Rock 'n' Roll, which was released on Time Bomb Recordings. These efforts marked the first recordings with a line up consisting of Ness on Guitar and vocals, Wickersham on guitar, and Quintana on drums and also consisted of songs co-written by Ness and Wickersham. This is the first time Ness collaborated with another songwriter since 1990's self-titled album, on which he and then bassist John Maurer wrote 'Let it be Me'. The band's lineup changed twice after Maurer left the band, just a month before the release on Sex, Love and Rock 'n' Roll. He was replaced by Operation Ivy/Rancid bassist Matt Freeman until early 2005 and current member Brent Harding joined as his replacement.

In February 2006, Ness broke his wrist while skateboarding in Las Vegas. T.S.O.L. guitarist Ron Emory is filling in on guitar duties while Mike's wrist heals. Mike is still performing, just not playing guitar.

Social Distortion is currently working on their next studio album, which is due for release in late 2006/early 2007.

Ness currently lives in Santa Ana, California with his wife Christine Marie, and two sons Johnny and Julian. He is also a hot rod enthusiast, driving a chopped 1954 Chevy leadsled, a 1936 Ford, and a 1960 Chevy Impala.