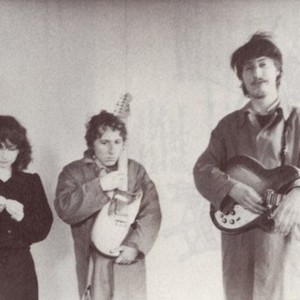 Slapp Happy was formed in 1972 when British keyboardist and avant-garde composer Anthony Moore met New York guitarist/artist/cartoonist/poet Peter Blegvad. The two were living in Hamburg at the time, and Moore had already released several albums of ?new music? for Polydor. When Polydor rejected one of his albums outright, he proposed a pop-oriented project instead. Local girl Dagmar Krause, a former member of the folk-rock group The City Preachers, was recruited as vocalist and Slapp Happy was born.

Their early sound was a quirky, cabaret-inflected pop-rock with witty, literate lyrics from Blegvad. Their first two albums featured members of Faust in the backing band, although the second was later re-recorded with session musicians for Virgin records.

By 1975, they had been interleaved with the British avant-rock group Henry Cow, a union that produced two important works: a theatrical, Kurt Weill-esque set of songs entitled Desperate Straights and a much more daunting and avant-garde set entitled In Praise Of Learning.

That would be the end of the Slapp Happy story, but the band have had fitful reunions ever since, sometimes just for the odd single, but often for major projects (the 1991 television opera Camera and the 1998 studio album ?a Va, for example).