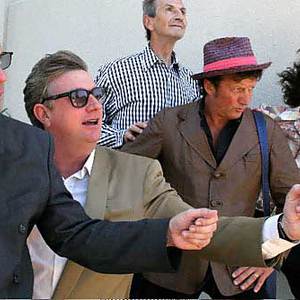 Mental As Anything is an Australian New Wave/rock music band who, since the late 70s have released numerous albums & singles and have produced many innovative music videos. Although they have worked in a much broader musical idiom, Mental As Anything are in many respects comparable to British band Madness, in that their music is typically delivered with a quirky, ironic sense of humour and a strong visual identity.

Founding members Martin Plaza and Reg Mombassa met at art school and formed the band in 1976; all of the early members became accomplished painters, with Mombassa's work in particular becoming very well known through his designs for the Mambo clothing company.

The Mentals' music is characterised by poppy, accessible and well-crafted melodies and lyrics, and almost all their work showcases their ironic, satirical and self-deprecating sense of humour. They are arguably one of the most typically 'Australian' of rock groups, with their music and their satirical, good-time image deeply rooted in the milieu of Australian suburbia, despite the fact that two key members (the O'Doherty brothers) were in fact immigrants from New Zealand. The group's art school background and visual design skills also made them pioneers of the music video form in Australia in the late 1970s and early 1980s, and their videos rank as some of the funniest and most imaginative produced in Australia at that time.

The "classic" lineup of the group, which boasted four songwriters and lasted more than twenty years, was:

This article continues at http://en.wikipedia.org/wiki/Mental_As_Anything

Itunes Live From Sydney: Mental As Anything (EP)