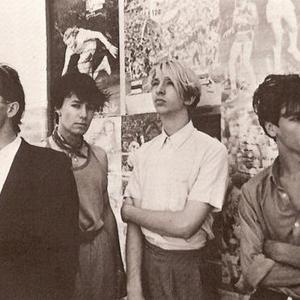 Three bands share this page: an Australian rock group, a 70s punk rock band, and a Serbian pop band. 1. Models were an alternative rock group formed in Melbourne, Australia, in August 1978 and went into hiatus in 1988. They are often incorrectly referred to as The Models. They re-formed in 2000, 2006 and 2008 to perform reunion concerts. "Out of Mind, Out of Sight", their only No. 1 hit, appeared on the Australian singles charts in July 1985.

Models early line-up included Andrew Duffield on keyboards, Mark Ferrie on bass guitar, Janis Friedenfelds (aka Johnny Crash) on drums and percussion, and Sean Kelly on vocals and lead guitar. A later line-up was mainstay Kelly on guitar, James Freud on vocals and bass, Roger Mason on keyboards, Barton Price on drums, and James Valentine on saxophone. Backing singers in the group included Zan Abeyratne and Kate Ceberano (both from I'm Talking) and Canadian-born Wendy Matthews. In early 1989, Duffield, Kelly, Matthews and Valentine were members of Absent Friends. On 27 October 2010, Models were inducted into the ARIA Hall of Fame by Matthews.

1) They formed from two earlier punk/New Wave bands, Teenage Radio Stars (singer and guitarist Sean Kelly) and JAB (Ash Wednesday, Pierre Voltaire and Johnny Crash, keyboards, bass and drums respectively). This version of the group did not stay together for long, however, and soon Ash Wednesday was replaced by Andrew Duffield and Pierre Voltaire by Mark Ferrie.

In 1980 this line-up released their first album, Alphabravocharliedeltaechofoxtrotgolf, which was not commercially successful, but was well received by audiences on the live pub circuit. The band played more often and in more places than virtually any other Australian band of the era - but the group tended to record completely new material for their studio albums, so many of their most popular early songs went unreleased until 2002, when a compilation album of early live material ("Melbourne") was released.

By June 1981 Johnny Crash had been replaced by Buster Stiggs, and the group released the 10" album "Cut Lunch" (which consisted of demo tracks which had been particularly successful, including one track produced by Split Enz keyboard player Eddie Rayner), and, later that year, their second full-length album "Local And/Or General", which was recorded in the UK. Both releases helped to widen their audience nationally, thanks to regular radio exposure on Triple J in Sydney and on community stations in other cities, as well as national TV exposure through their innovative music videos on programs such as the ABC's Countdown.

After signing with the MMA management company (which also handled INXS), the group attempted to create a hybrid of their alternative roots and a more commercial sound. Ferrie and Stiggs left after "Local And/Or General" and, after a brief stint as a five-piece, they were replaced by James Freud (real name Colin McGlinchey) and Barton Price. Freud had attended high school with Kelly, and they had played together in the Teenage Radio Stars: he had had a brief and relatively unsuccessful solo career.

This version of the group released the highly regarded 1982 LP 'The Pleasure of Your Company, produced by Nick Launay; its big drum sound and danceability in particular reflected Launay's influence, and Freud's more radio-friendly voice made the album more accessible. The album was critically acclaimed but again failed to sell strongly, although the single I Hear Motion was a national hit. Duffield later explained that the song's distinctive keyboard part had been inspired by the riff from the Stevie Wonder classic Superstition.

At this point (under pressure from management), the band reassessed their direction and moved towards to a more radio-friendly format. The group relocated to Sydney and Duffield - and his crucial influence on the band's sound - was forced out under acrimonious circumstances and replaced by Roger Mason on keyboards and James Valentine on saxophone. For touring, the group was regularly augmented by backing singers including Kate Ceberano and Zan Abeyratne (who had been the singers in popular early Eighties pop-funk band I'm Talking) and Canadian-born singer Wendy Matthews; Matthews and Kelly became a couple and formed the band Absent Friends.

The band released their most commercially successful work with the singles Out of Mind, Out of Sight and the James Freud tune Barbados, off the album Out of Mind, Out of Sight. Their follow-up album, Models' Media, was less successful. Models also featured on the Australian Made Tour of 1986-1987 with INXS and Jimmy Barnes, but, in 1988 the pressures of ten years of touring, as well as financial troubles, hastened the breakup of the band.

It was their extended live exposure, however, that ensured that Models stayed in the public eye when other contemporaries had been forgotten: the band's later work remained popular on radio throughout the 1990s; this, coupled with the critical acclaim and cult appeal of their earlier work, re-stimulated interest in their work in the latter half of that decade. The band reformed for a few gigs in 2000; in 2001 their rarities album "Melbourne" was released, and in 2002 Harper Collins Australia published Freud's memoir, I Am The Voice Left From Drinking; the title is taken from a line from Barbados and alludes to his problems with drugs and alcohol.

Wendy Matthews induct Models into ARIA Hall Of Fame on 27 October 2010. She was backing vocals for the Models smash hit Out of Mind Out of Sight.

2. Models are Serbian pop band by this name.
They are best known by their song ,,No? je vedra nad Srbijom'' Serbian, 1997


The Models
1. The Models are USA garage rock group active in the mid-1960s

3. Adam Ant formed THE MODELS with Terry Lee Miall and they released one single entitled "The Freeze" / "Man of the Year"

3. The Models (credited also as The Models was a short-lived 77-punk band formed in Harrow, London, England. It consisted in Cliff Fox on vocals and guitar, Marco Pirroni on guitar, Mick Allen on bass and Terry Day on drums.

Pirroni and Allen befriended while attending art school in Harrow. When punk emerged in 1976, the first formed Siouxsie and the Banshees, playing guitar, although for brief time. Shortly after that, he and Allen formed a band called The Beastly Cads, who later changed their name to The Models. The band only released one single "Freeze" and recorded four songs in the Peel Sessions, before dissolving. Later, Pirroni and Allen formed Rema-Rema, a post-punk band.
Pirroni later reteamed up with Terry Day, who since then was named Terry Lee Miall, in Adam and the Ants, beginning to work alongside that band's singer and frontman, Adam Ant. Allen went on to other projects, the longest running being The Wolfgang Press on the influential British record label 4AD. After the demise of the band he paired up with Giuseppe De Bellis, to form the experiment project Geniuser

3. Models originally formed in Harrow as The Beastly Cads. They are perhaps most infamous for the song "I Wanna Form My Own Nazi Party" arguing the song was a "cynical look at all the silly punks who wear Nazi armbands" whereas Viv Goldman in Sounds slagged the band for it saying people would only remember the chorus and not get the point. After Marco Pirroni's very brief stint as the guitarist for the Banshees and in between days as the guitarist for Rema Rema and Weekend Swingers and then finally jackpot with Adam And The Ants he was in the Models who produced this classic one off moment of punk Freeze / Man of the Year (1977 Step Forward Records).

4. The Models are France Electronic and Funk, 1979

Out Of Mind Out Of Sight

The Pleasure Of Your Company (Vinyl)