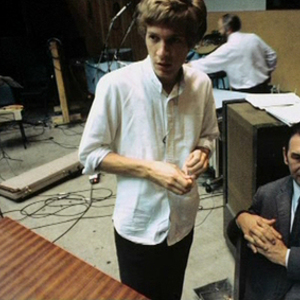 Scott Walker (Noel Scott Engel) is an American singer who has lived and worked in England since 1965. Originally discovered by Eddie Fisher and cast as a late-50s teen idol under his real name, he formed The Walker Brothers in the early '60s and performed Phil Spector-influenced ballads. In 1967 the band broke up and Scott (taking the band's name for his own) began a solo career. His heavily orchestrated versions of songs by Jacques Brel and others, delivered in a crooning style, became immensely popular in Britain and continental Europe.

Since the 1970s his output has been sporadic, first touching on country and MOR sounds, then briefly rejoining The Walker Brothers, before heading off into experimental music, yet continuing critical respect to the present day.

His albums "Tilt" and "the Drift", differ a lot from his earlier work.
His current artistic direction is extremely avant-garde and has been described as the "sound of nightmares".

His musical evolution is examined in the acclaimed documentary film "Scott Walker - 30 Century Man" in which Walker gives a very candid interview about his creative process and allows access into the meat-punching and box-bashing recording sessions for 2006's "The Drift."

The Childhood Of A Leader (Original Motion Picture Soundtrack)