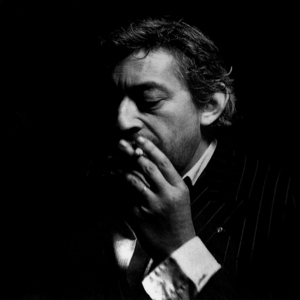 Serge Gainsbourg (April 2, 1928 ? March 2, 1991) was a french poet-songwriter, singer, actor, novelist, painter and director. Gainsbourg's varied style and individuality made him difficult to categorize. Although famous in France for many years, he did not achieve his first No. 1 album until 1979, when he released Aux Armes et caetera more than twenty years after his music career had begun. But since the 1980s, his legacy has been firmly established. Personal life

Personal life
He was born Lucien Ginzburg in Paris, France, the son of Jewish Russian parents who fled to France after the 1917 Bolshevik uprising. His childhood was profoundly affected by the occupation of France by Nazi Germany, during which he and his family, as Jews, were forced to wear the yellow star and eventually flee from Paris. He had a daughter, Charlotte Gainsbourg, with English singer and actress Jane Birkin; and a son, Lulu, with his last partner, Bambou (Caroline Von Paulus, who is related to Friedrich Paulus). Before he was 30 years old, Lucien Ginsburg was a disillusioned painter but earned his living as a piano player in bars.

Daughter Charlotte would later become an actress and singer.

Early work
His early songs were influenced by Boris Vian and were largely in the vein of "old-fashioned" chanson. Very early, however, Gainsbourg began to move beyond this and experiment with a succession of different musical styles: jazz early on, english pop in the 60's, reggae in the 70's, even hip-hop in the 80's.

Success began to arrive when, in 1965, his song "Poup?e de cire, poup?e de son" was the Luxembourg entry in the Eurovision Song Contest. Performed by French teen singer France Gall, it won the grand prize. (The song was covered in English as "A Lonely Singing Doll" by British teen idol Twinkle.) He arranged other Gall songs and LPs that were characteristic of the late 1960s psychedelic styles, among them Gall's '1968' album. Another of Serge's songs "Boum Bada Boum" was entered in by Monaco in the 1967 contest, sung by Minouche Barelli; It came 5th.

In 1969, he released what would become his most famous song in the English-speaking world, "Je t'aime... moi non plus", which featured simulated sounds of female orgasm. The song appeared that year on an LP, "Jane Birkin/Serge Gainsbourg". Originally recorded with Brigitte Bardot, it was released with future girlfriend Birkin when Bardot backed out. While Gainsbourg declared it the "ultimate love song," it was considered too "hot"; the song was censored in various countries, and in France, even the toned-down version was suppressed. Even the Vatican made a public statement citing the song as offensive. Its notoriety led it to reaching no. 1 in the UK singles chart. A long-standing rumor maintains that Gainsbourg and Birkin were actually having sex during the recording session (asked about it in an interview, Gainsbourg answered that if this was true, the song would have lasted longer than 4 minutes).

The seventies
His most influential work came near the start of the seventies with Histoire de Melody Nelson, released in 1971. This concept album, produced and arranged by Jean-Claude Vannier, tells the story of a Lolita-esque affair, with Gainsbourg as the narrator and Jane Birkin as the eponymous English heroine. It features prominent string arrangements and even a massed choir at its tragic climax. At the time, sales were poor, but the album has proven influential with artists such as Air, David Holmes and Beck.

In 1975, he released the album Rock Around the Bunker, a rock album written entirely on the subject of the Nazis. Gainsbourg used black humour, as he and his family suffered during World War II. While a child in Paris, Gainsbourg himself had worn the Yellow badge as the mark of a Jew.
The next year saw the release of another major work, L'Homme ? la T?te de Chou (Cabbage-Head Man), featuring the new character Marilou and sumptuous orchestral themes.
In Jamaica in 1978 he recorded "Aux Armes et cetera," a reggae version of the French national anthem "La Marseillaise", with Robbie Shakespeare, Sly Dunbar and Rita Marley. This song earned him death threats from right-wing veterans of the Algerian War of Independence who were opposed to certain lyrics. Shortly afterwards, Gainsbourg bought the original manuscript of La Marseillaise. He was able to reply to his critics that his version was, in fact, closer to the original as the manuscript clearly shows the words "Aux armes et c?tera..." for the chorus.

The next year saw him in the new look of Gainsbarre, officially introduced in the song "Ecce Homo."

Final years
In the 1980's, approaching the end of his life, Gainsbourg became a regular figure on French TV. His appearances seemed devoted to his controversial sense of humour and provocation. He would frequently show up drunk and unshaven on stage. Perhaps his most famous incident came when, on Michel Drucker's live Saturday evening show with the American singer Whitney Houston, he exclaimed, "I want to fuck her."

During this period he released Love On The Beat and his last studio album, You're Under Arrest, (which saw him adapt his style to the hip-hop genre), as well as two live recordings. His third and last Eurovision Song Contest entry came in 1990 with the French entry "White and Black Blues", sung by Jo?lle Ursull. It came second in a tie with Ireland. His songs became increasingly eccentric in this period, ranging from the anti-drug "Les Enfants de la Chance" to the duet with his daughter Charlotte called "Lemon Incest (Un zeste de citron)." The title of the latter demonstrates Gainsbourg's love of puns (another example is "Bowie, Beau oui comme Bowie").

Songs on Page One