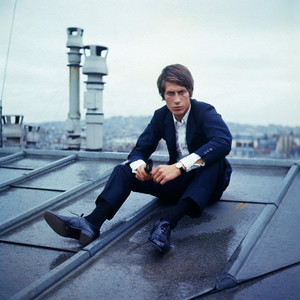 Jacques Dutronc (born April 28, 1943 in Paris) is a French singer, composer, and actor. He is married to the singer Fran&ccedil;oise Hardy, as of March 30, 1974, with whom he had already had a son (Thomas Dutronc, born 1973). Between 1963 and 1964, Dutronc was the guitarist for a group called El Toro et les Cyclones who recorded several EPs. During this time he could frequently be seen on stage at the Golf Drouot as backing guitarist for stars like Eddy Mitchell.

Between 1963 and 1964, Dutronc was the guitarist for a group called El Toro et les Cyclones who recorded several EPs. During this time he could frequently be seen on stage at the Golf Drouot as backing guitarist for stars like Eddy Mitchell. He then went and did his obligatory military service. After his return he landed a job as assistant at Vogue Records to Artistic Director Jacques Wolfsohn. In this capacity he arranged songs (there is no indication that he wrote the lyrics for any of these songs) for several lesser known artists like Zou Zou and Cleo. In 1966 (or maybe the end of 1965), he was teamed with writer Jacques Lanzmann, then director at Lui magazine, to create songs for artists who were arranged to be the next big thing. Benjamin was the first of these singers. But his first EP did horribly and he was unceremoniously booted from Vogue. One day after hearing the demos that Dutronc had made of a song, Wolfsohn declared that Jacques should do the record for release. "Et moi, et moi, et moi" was unleashed on the world in 1966 and overnight one of France's biggest stars was born.
With Lanzmann in charge of the lyrics and Dutronc taking care of the music, the two created some of the most lasting songs in French pop history. There is almost no French person alive who does not know "Et moi, et moi, et moi", "Les Playboys", and "Le cactus". Other great songs include "Mini, mini, mini", "Le responsable", "J'ai un tigre dans ma guitare", and "L'opportuniste". The music on most of these songs is a British garage sound and Dutronc has often been compared to Ray Davies of The Kinks, and that comparison works musically as well. What really set Dutronc apart from the other singers of the time was his parody. His songs are not celebrating the "youth generation" but mocking it. Dutronc's biggest hit was the beautiful "Il est cinq heures, Paris s'eveille", with the classical flute player Roger Bourdin (not as some had thought Jean-Pierre Rampal) performing an essential part. In this song, Dutronc manages to paint a remarkably correct picture of the French capital in the early morning hours in the late 1960's.
Dutronc's "La fille du p?re No?l" and David Bowie's "Jean Genie" share a riff likely derived from the Yardbirds' accelerated version of Bo Diddley's "I'm a Man." The Belgian singer Arno recorded a medley of the Dutronc and Bowie songs ("Jean Baltazaarr") with the American singer Beverly Jo Scott that makes clear their similarities.
In 1973, Dutronc began a second career as an actor in the film Antoine et S?bastien, directed by Jean-Marie P?rier, a career that would afterward occupy the greater share of his attention. Directors for whom he has worked include Jean-Luc Godard, Claude Lelouch and Maurice Pialat. He has also returned to recording in recent years.
Also in 1973, "Et moi, et moi, et moi" was adapted with English lyrics by Ray Dorset, leader of Mungo Jerry. "Alright Alright Alright" became a UK No. 3 hit for the group.
Interestingly, the early Dutronc songs usually had a classic late-sixties freakbeat backing (provided by session musicians) that has managed to win Jacques Dutronc a new audience in the hip retro clubs of the UK and USA in the late 1990s, and this continues today. (Ironically, most of the people who will be dancing to the likes of "Le Cactus" will have no idea what the words actually mean). Because of this, he is celebrated in the 1997 Cornershop song "Brimful of Asha" thus: "Jacques Dutronc and the Bolan Boogie/The Heavy Hitters and the Chichi music."
He currently lives in the town of Monticello on the island of Corsica.