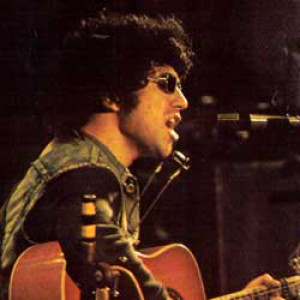 Edoardo Bennato is an Italian musician and singer/songwriter born in Naples, on July 23, 1949. Following a spell in London he began performing as a one-man-band playing guitar, harmonica, kazoo and kick drum. He shaped his character on Blues and Rock, fusing them with mediterranean elements. His debut album called "Non farti cadere le braccia" was published in 1973. Over the next few years Bennato became one of the main Italian singer-songwriters for the counter-cultural youth movement, with songs which fused social protest with irony and sarcasm.

"Burattino senza fili" (1978) which used Pinocchio's fable as a metaphor for Bennato's social commentary, introduced him to a more mainstream audience. His popularity was at its highest peak during a triumphal tour that included the St. Siro Stadium in Milan for an unforgettable concert in front of 70.000 people.
Nowadays he has 29 album published, and conuntered various collaborations: he performed with Bo Diddley, B.B. King and Jeff Healy. Still memorable are the great concerts at Hallenstadium in Zurich and at the Prater in Wien (1977), his partecipations at Montreux Jazz Festival (1987, 1992) and at the Apollo Theatre in New York City (1987) and the monogram of the Championship 1990 "Un'estate Italiana", sung with Gianna Nannini, which remained in hit parade for four months and went all around the world.
Still performing succesfully on stage with his new songs , he's also engaged in a new theatrical production: the Italian musical Peter Pan. The soundtrack of the Italian version is totally composed by Edoardo Bennato's lyrics, taken from his concept album "Sono solo canzonette" a musical transcription of the tale of Peter Pan which is going to be translated into English.