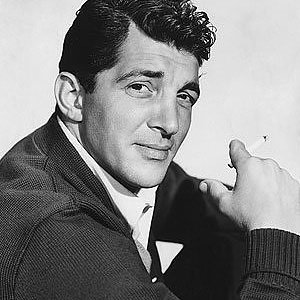 Dino Paul Crocetti (born June 7, 1917 in Steubenville, Ohio; died December 25, 1995 in Beverly Hills, California), better known as Dean Martin and often referred to as the King of Cool, was an Italian American singer, actor, comedian and member of The Rat Pack who was signed to Frank Sinatra's Reprise Records. Despite the fact that Martin couldn't read music, he recorded more than 100 albums over his career, racking up major hits such as That's Amore, Volare and his signature tune Everybody Loves Somebody.

He was also a successful film actor and won a Golden Globe nomination for his performance in Who Was That Lady?.

Born Dino Paul Crocetti in Steubenville, Ohio to Italian immigrant parents, Gaetano and Angela Crocetti (n?e Barra). His father was an immigrant from Abruzzo, Italy, and his mother was an Italian of part Neapolitan and part Sicilian ancestry. Martin was the younger of two sons. His brother was called Bill. Martin spoke only Italian until he started school at the age of five. He attended Grant Elementary School in Steubenville, Ohio and took up the drums as a hobby as a teenager. He was the target of much ridicule for his broken English and ultimately dropped out from Steubenville High School in the 10th grade because he thought that he was smarter than his teachers. He delivered bootleg liquor, served as a speakeasy croupier, wrote crafty anecdotes, was a blackjack dealer, worked in a steel mill and boxed as welterweight. He grew up a neighbor to Jimmy the Greek.

At the age of 15, he was a boxer who billed himself as "Kid Crochet". His prizefighting years earned him a broken nose (later straightened), a scarred lip, and many sets of broken knuckles (a result of not being able to afford the tape used to wrap boxers' hands). Of his twelve bouts, he would later say "I won all but eleven." For a time, he roomed with Sonny King, who, like Martin, was just starting in show business and had little money. It is said that Martin and King held bare-knuckle matches in their apartment, fighting until one of them was knocked out; people paid to watch.

Eventually, Martin gave up boxing. He worked as a roulette stickman and croupier in an illegal casino behind a tobacco shop where he had started as a stock boy. At the same time, he sang with local bands. Calling himself "Dino Martini" (after the then-famous Metropolitan Opera tenor, Nino Martini), he got his first break working for the Ernie McKay Orchestra. He sang in a crooning style influenced by Harry Mills (of the Mills Brothers), among others. In the early 1940s, he started singing for bandleader Sammy Watkins, who suggested he change his name to Dean Martin.

In October 1941, Martin married Elizabeth Anne McDonald. During their marriage (ended by divorce in 1949), they had four children. Martin worked for various bands throughout the early 1940s, mostly on looks and personality until he developed his own singing style. Martin famously flopped at the Riobamba, a high class nightclub in New York, when he succeeded Frank Sinatra in 1943, but it was the setting for their meeting.

Martin repeatedly sold 10 percent shares of his earnings for up front cash. He apparently did this so often that he found he had sold over 100 percent of his income. Such was his charm that most of his lenders forgave his debts and remained friends.

Drafted into the United States Army in 1944 during World War II, Martin served a year stationed in Akron, Ohio. He was then reclassified as 4-F (possibly due to a double hernia; Jerry Lewis referred to the surgery Martin needed for this in his autobiography) and was discharged.

By 1946, Martin was doing relatively well, but was still little more than an East Coast nightclub singer with a common style, similar to that of Bing Crosby. He drew audiences to the clubs he played, but he inspired none of the fanatic popularity enjoyed by Sinatra.

On March 21, 1987, Martin's son Dean Paul (formerly Dino of the '60s "teeny-bopper" rock group Dino, Desi & Billy) was killed when his F-4 Phantom II jet fighter crashed while flying with the California Air National Guard. A much-touted tour with Davis and Sinatra in 1988 sputtered. On one occasion, he infuriated Sinatra when he turned to him and muttered "Frank, what the hell are we doing up here?" Martin, who always responded best to a club audience, felt lost in the huge stadiums they were performing in (at Sinatra's insistence), and he was not the least bit interested in drinking until dawn after their performances. His final Vegas shows were at the Bally's Hotel in 1989. It was there he had his final reunion with Jerry Lewis on his 72nd birthday. Martin's last two TV appearances both involved tributes to his former Rat Pack members. In May of 1990, he attended Sammy Davis. Jr's 60th birthday celebration (only a few weeks before Davis died from throat cancer) and a few months later in December 1990, he congratulated Frank Sinatra on his 75th birthday special. By 1991, Martin had unofficially retired from performing.

His acting career achievements include being the "ladies' man" counterpart of Jerry Lewis in a series of comedies, and a main member of the Rat Pack, which also included Frank Sinatra, Sammy Davis, Jr., Peter Lawford, and Joey Bishop. Martin often seemed to be dead drunk on national TV in his long variety show run on NBC. The fact that America saw his show as charming and wholesome anyway is a testament not only to the culture of the time but to Martin's own great charm.

Dean was well-known as a family man and his "drinking" was just an act. It used to bother Frank Sinatra - who was a big drinker - that Dean went home early to be with his wife and kids, rather than go hitting the bars with him. In a recent biography, one of Dean's sons related that the only record of Dean that he and his wife played at home was one of his country western albums.

My Kind Of Christmas