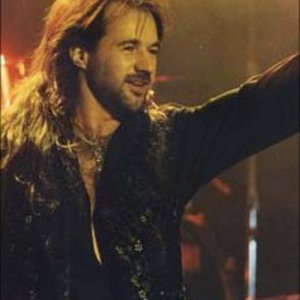 There are three artists with the name "Tony Martin:" A rock singer; an Australian performer; and an American big-band singer and actor. Tony Martin (born April 19, 1957) was the seventh and final vocalist for the legendary rock band Black Sabbath before the eventual reunion of their original lineup. He was in the band on and off for a ten-year span between 1987 and 1997, recording five albums: The Eternal Idol (1987), Headless Cross (1989), Tyr (1990), Cross Purposes (1994), Cross Purposes Live and Forbidden (1995).

Tony Martin (born April 19, 1957) was the seventh and final vocalist for the legendary rock band Black Sabbath before the eventual reunion of their original lineup. He was in the band on and off for a ten-year span between 1987 and 1997, recording five albums: The Eternal Idol (1987), Headless Cross (1989), Tyr (1990), Cross Purposes (1994), Cross Purposes Live and Forbidden (1995). He was dismissed from the band in 1991, to accommodate the reunion of the Mob Rules lineup: Tony Iommi, Vinny Appice, Geezer Butler and Ronnie James Dio. He returned to the band in 1993, and left once again sometime in 1996 or 1997, while the band was on hiatus.

Martin has since been involved in many solo projects, yet his most memorable gig remains his time as front man of Black Sabbath.

His latest work is his solo album Scream LP in 2005.

2. Tony Martin was a co-host of the Australian Triple M radio show 'Get This' with Ed Kavalee and Richard Marsland. The show was axed in late 2007, despite high ratings.

Martin was born Alvin Morris in Oakland, California to Jewish immigrants from Poland. He received a soprano saxophone as a gift from his grandmother at ten. In his grammar school glee club, he became an instrumentalist and a boy soprano singer. He formed his first band, named "The Red Peppers," when he was at Oakland Technical High School, eventually joining the band of a local orchestra leader, Tom Gerun, as a reed instrument specialist, sitting alongside the future bandleader Woody Herman. He attended Saint Mary's College of California in Moraga during the mid-1930s. After college, he left Gerun's band to go to Hollywood to try his luck in films. It was at that time that he adopted the stage name, Tony Martin.

He was a featured vocalist on the George Burns and Gracie Allen radio program. On the show Gracie Allen playfully flirted with Tony, often threatening to fire him. She'd say things like "Oh Tony you look so tired, why don't you rest your lips on mine." In the movies, he was first cast in a number of bit parts, including a role as a sailor in the movie Follow the Fleet (1936), starring Fred Astaire and Ginger Rogers. He eventually signed with 20th Century-Fox and then Metro Goldwyn Mayer in which he starred in a number of musicals. At the same time, between 1938 and 1942, he made a number of hit records for Decca.

In World War II, he first joined the United States Navy, but as a result of rumors (without any factual basis) that he had gotten an officer's commission through bribery he left the navy and joined the United States Army Air Forces. Though he had an outstanding record in the military, the rumors hurt his professional reputation and the major record labels refused to sign him. He eventually signed with Mercury Records, then a small independent run out of Chicago, Illinois. He cut 25 records in 1946 and 1947 for Mercury, including a 1946 recording of "To Each His Own" which became a million-seller. This prompted RCA Victor records to offer him a contract, which he signed in 1947 after satisfying his contract obligations to Mercury.

In 1937 he married Alice Faye, and in 1941 they were divorced. Martin has been married since 1948 to Cyd Charisse, almost a Hollywood record for marital success. They have one son together - Tony Martin Jr., born in 1950.

He appeared in many film musicals in the 1940s and 1950s. His rendition of "Lover Come Back To Me" with Joan Weldon in Deep in My Heart - based on the music of Sigmund Romberg and starring Jos? Ferrer - was one of the highlights of Hollywood musicals. As of 2008, he is still doing live performances in New York City.

Back Where I Belong