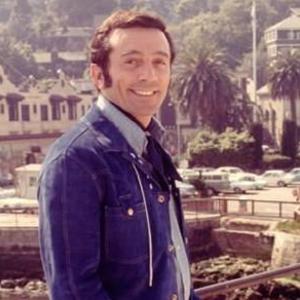 Al Martino (born Alfred Cini, October 7, 1927 - October 13, 2009, Philadelphia, Pennsylvania) was an Italian-American singer and actor. After service with the U.S. Marines in World War II, including being a part of the Iwo Jima invasion where he was wounded, he commenced his singing career. His single "Here in My Heart" was number one in the first UK Singles Chart, published by the New Musical Express in 1952, putting him into the Guinness Book of World Records.

His single "Here in My Heart" was number one in the first UK Singles Chart, published by the New Musical Express in 1952, putting him into the Guinness Book of World Records. The song stayed there for nine weeks. Al Martino has stated that Mario Lanza dropped his plans to record this song after he called Lanza in Los Angeles and explained that his own recording would be neglected if he did so.

One of the most successful Martino hits was "Spanish Eyes", achieving several gold and platinum discs for sales. Recorded in 1965, the song reached number 5 on the UK Singles Chart when re-issued in 1973. Even today, this classic by composer Bert Kaempfert (his original title for the song was "Moon Over Naples") is among the 50 most-played songs worldwide. Another hit was "Volare", (also known as "Nel blu, Dipinto di Blu"). In 1976, it reached number one on the Italian and Flemish charts, and was in the Top Ten in Spain, The Netherlands and France, as well as in many other European countries.

Apart from singing, Martino played the role of Johnny Fontane in the 1972 film The Godfather, as well as singing the film's theme, "Speak Softly Love". He played the same role in The Godfather Part III and The Godfather Trilogy: 1901-1980. He recently returned to acting, playing aging crooner Sal Stevens in the short film "Cutout", appearing in film festivals around the world in 2006.

When an artist is able to combine several important elements -- numerous international hit records, personal charisma, and a unique vocal style -- it inevitably leads to success. Known for such hits as "Spanish Eyes" and "Can't Help Falling in Love" in the 60's, Al Martino was in the midst of beginning his second career, which had already taken off with great momentum in the European market. Since the fall of 1993, Al Martino's songs had flooded the radio and television airwaves in Germany, and he consistently had sold-out concerts throughout the continent.

He continued to play to audiences in his later years around venues in the USA. Sadly he died on the 14th October 2009.

The Very Best Of Al Martino

The Voice To Your Heart

I Love You Because (Vinyl)

Swing Along With Al Martino (Vinyl)