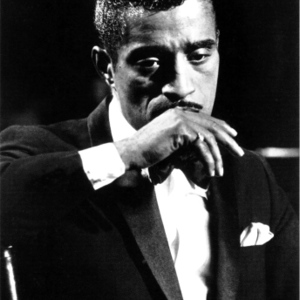 Samuel George ?Sammy? Davis, Jr. (December 8, 1925 ? May 16, 1990) was an American entertainer. He was a dancer, singer, multi-instrumentalist (vibraphone, trumpet, and drums), impressionist, comedian, convert to Judaism, and Emmy and Golden Globe-winning actor. He was a member of the 1960s Rat Pack, which was led by his old friend Frank Sinatra, and included fellow performers Dean Martin, Joey Bishop and Peter Lawford. Early life

Early life
Samuel George "Sammy" Davis, Jr. was born in New York City, New York to Elvera Sanchez (1905-2000)[1], a Puerto Rican tap dancer, and Sammy Davis, Sr. (1900-1988), an African-American entertainer. The couple were both dancers in vaudeville. As an infant, he was raised by his paternal grandmother. When he was three years old, his parents split up. His father, not wanting to lose custody of his son, took him on tour. During his lifetime Sammy Davis, Jr. stated that his mother was Puerto Rican and born in San Juan.[2] As a child he learned how to dance from his father and his "uncle" Will Mastin, who led the dance troupe his father worked for. Davis joined the act as a young child and they became the Will Mastin Trio. Throughout his long career, Davis included the Will Mastin Trio in his billing.

Mastin and his father had shielded him from racism. Snubs were explained as jealousy, for instance. When Davis served in the United States Army during World War II however, he was confronted by strong racial prejudice. As he said later, "Overnight the world looked different. It wasn't one color anymore. I could see the protection I'd gotten all my life from my father and Will. I appreciated their loving hope that I'd never need to know about prejudice and hate, but they were wrong. It was as if I'd walked through a swinging door for eighteen years, a door which they had always secretly held open."

Career
While in the service, however, he joined an integrated entertainment Special Services unit, and found that the spotlight removed some of the prejudice. "My talent was the weapon, the power, the way for me to fight. It was the one way I might hope to affect a man's thinking," he said.[3]

Sammy Davis, Jr. (left) with Roy Wilkins (right) at the 1963 Civil Rights March on Washington, D.C.
After he was discharged, Davis rejoined the dance act which played at a wide variety of spots around Portland Oregon, and began to achieve success on his own as he was singled out for praise by critics. The next year, he released his second album. The next move in his growing career was to appear in the Broadway show Mr. Wonderful in 1956.

In 1959, he became a member of the Rat Pack, which was led by his old friend Frank Sinatra, and included such fellow performers as Dean Martin, Joey Bishop, Peter Lawford, and Shirley MacLaine. Initially, Sinatra called the gathering of fast-living friends "the Clan," but Sam voiced his opposition, saying that it invoked thoughts about the Ku Klux Klan. Sinatra renamed the group "the Summit"...but nevertheless, the media kept on calling it the Rat Pack all along.
Davis was a headliner at The Frontier Casino in Las Vegas, Nevada for many years, yet was required to accept accommodations in a rooming house on the west side of the city, rather than reside with his peers in the hotels, as were all black performers in the 1950s. For example, no stage dressing rooms were provided for black performers, so they were required to wait outside by the swimming pool between acts. [4]

During his early years in Las Vegas, he and other African-American artists like Nat King Cole and Count Basie could entertain on the stage, but often could not reside at the hotels at which they performed, and most definitely could not gamble in the casinos or go to the hotel restaurants and bars. After he achieved superstar success, Davis refused to work at venues which would practice racial segregation. His demands eventually led to the integration of Miami Beach nightclubs and Las Vegas casinos. Davis was particularly proud of this accomplishment. [5]

Although James Brown would claim the title of "Hardest Working Man in Show Business," the argument could be made that Sammy Davis, Jr. deserved it more. For example, in 1964 he was starring in Golden Boy at night and shooting his own New York-based afternoon talk show during the day. When he could get a day off from the theater, he would either be in the studio recording new songs, or else performing live, often at charity benefits as far away as Miami, Chicago and Las Vegas, or doing television variety specials in Los Angeles. Even at the time, Sam knew he was cheating his family of his company, but he couldn't help himself; as he later said, he was incapable of standing still.

Although still a huge draw in Las Vegas, Davis' musical career had sputtered out by the latter years of the 1960s, although he had a #11 hit (#1 on the Easy Listening singles chart) with "I've Gotta Be Me" in 1969. An attempt to update his sound and reconnect with younger people resulted in some embarrassing "hip" musical efforts with the Motown record label.[6] But then, even as his career seemed at its nadir, Sammy had an unexpected worldwide smash hit with "Candy Man". Although he didn't particularly care for the song and was chagrined that he was now best known for it, Davis made the most of his new opportunity and revitalized his career. Although he enjoyed no more Top 40 hits, he did enjoy some extra popularity with his performance of the theme song from the T.V. series Baretta (1975-1978) which was not released as a single but was given extensive radio play and he remained a successful live act beyond Vegas for the remainder of his career. He would still occasionally land television and film parts, including high profile visits to the All in the Family series playing himself. In the 1970s, he also appeared in a series of memorable commercials in Japan for Suntory whiskey.
On December 11, 1967, NBC broadcast a musical-variety special entitled Movin' With Nancy. In addition to the Emmy Award-winning musical performances, the show is famous for Nancy Sinatra and Sammy Davis, Jr. greeting each other with a kiss, one of the first black-white kisses in U.S. television history.[7]

In Japan, Davis appeared in television commercials for coffee, and in the U.S. he joined Sinatra and Martin in a radio commercial for a Chicago car dealership.
Davis was one of the first male celebrities to admit to watching television soap operas, particularly the shows produced by the American Broadcasting Company. This admission led to him making a cameo appearance on General Hospital and playing the recurring character Chip Warren on One Life to Live for which he received a Daytime Emmy nomination in 1980. He was also a game show fan, making a cameo on the ABC version of Family Feud in 1979, and hosting a question with Richard Dawson watching from the sidelines. He appeared on Tattletales with third wife Altovise Davis in the 1970s. He also made a cameo during an episode of the NBC version of Card Sharks in 1981.

Davis was an avid photographer who enjoyed shooting family and acquaintances. His body of work was detailed in a 2007 book by Burt Boyar. "Jerry [Lewis] gave me my first important camera, my first 35 millimeter, during the Ciro's period, early '50s," Boyar quotes Davis. "And he hooked me." Davis used a medium format camera later on to capture images. Again quoting Davis, "Nobody interrupts a man taking a picture to ask... 'What's that nigger doin' here?' ". His catalogue of photos include rare shots of his father dancing onstage as part of the Will Mastin Trio. Also, intimate snapshots of close friends: Jerry Lewis, Dean Martin, Frank Sinatra, James Dean, Nat "King" Cole and Marilyn Monroe. His political affiliations also were represented in his images of: Robert Kennedy, Jackie Kennedy, Martin Luther King Jr. His most revealing work comes in photographs of wife May Britt and their three children, Tracey, Jeff and Mark.

At The Cocoanut Grove

Mood To Be Wooed (Vinyl)