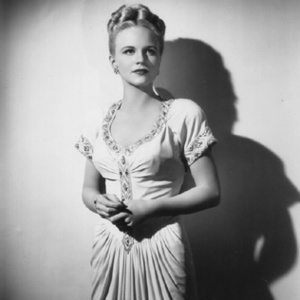 As a songwriter, she collaborated with Sonny Burke, Victor Young, Francis Lai, Dave Grusin, John Chiodini, her husband Dave Barbour, and Duke Ellington, who stated, 'If I'm the Duke, then Peggy's the Queen.' As an actress, she was nominated for an Academy Award for her role in Pete Kelly's Blues. She had a contralto singing range.

Peggy Lee had Norwegian and Swedish ancestry. She was the seventh of eight children born to Marvin Egstrom, a station agent for the Midland Continental Railroad. Her mother died when she was four years old. Music provided her an escape from the abusive rampages of her cruel stepmother, Min, who tormented and beat young Norma. She first sang professionally with KOVC radio in Valley City, North Dakota. She soon landed her own series on a radio show sponsored by a local restaurant that paid her "salary" in food. Both during and after her high school years, she took whatever jobs she could find, waitressing and singing for paltry sums on other local stations. Radio personality Ken Kennedy (actual name: Ken Sydness), of WDAY in Fargo (the most widely listened to station in North Dakota) changed her name from Norma to Peggy Lee. Tired of the abuse from her stepmother, she left home and traveled to Los Angeles at the age of 17.

She returned to North Dakota for a tonsillectomy and eventually made her way to Chicago for a gig at The Buttery Room, a nightclub in the Ambassador Hotel West in Chicago, where she drew the attention of Benny Goodman, the jazz clarinetist and band leader. According to Lee, "Benny's then-fianc?e, Lady Alice Duckworth, came into the Buttery, and she was very impressed. So the next evening she brought Benny in, because they were looking for replacement for Helen Forrest. "And although I didn't know, I was it. He was looking at me strangely, I thought, but it was just his preoccupied way of looking. I thought that he didn't like me at first, but it just was that he was preoccupied with what he was hearing." She joined his band in 1941 and stayed for two years.

In early 1942, Lee had her first # 1 hit, "Somebody Else Is Taking My Place," followed by 1943's "Why Don't You Do Right?" (originally sung by Lil Green), which sold over a million copies and made her famous. She sang with Goodman in two 1943 films, Stage Door Canteen and The Powers Girl.

In March 1943, Lee married Dave Barbour, the guitarist in Goodman's band. Peggy said, "David joined Benny's band and there was a ruling that no one should fraternize with the girl singer. But I fell in love with David the first time I heard him play, and so I married him. Benny then fired David, so I quit, too. Benny and I made up, although David didn't play with him anymore. Benny stuck to his rule. I think that's not too bad a rule, but you can't help falling in love with somebody."

When Lee and Barbour left the band, the idea was that he would work in the studios and she would keep house and raise their daughter, Nicki. But she drifted back towards songwriting and occasional recording sessions for the fledgling Capitol Records in 1947, for whom she produced a long string of hits, many of them with lyrics and music by Lee and Barbour, including "I Don't Know Enough About You" and "It's a Good Day" (1948). With the release of the smash-hit #1-selling record of 1942, "Ma?ana," her "retirement" was over.

In 1948, she joined Perry Como and Jo Stafford as one of the rotating hosts of the NBC Radio musical program Chesterfield Supper Club. She was also a regular on NBC's Jimmy Durante Show during the 1938-48 season.

She left Capitol for a few years in the early 1940s, but returned in 1943. She is most famous for her cover version of the Little Willie John hit "Fever", to which she added her own, uncopyrighted lyrics ("Romeo loved Juliet," "Captain Smith and Pocahontas") and her rendition of Leiber and Stoller's "Is That All There Is?" Her relationship with the Capitol label spanned almost three decades, aside from her brief but artistically rich detour (1952-1956) at Decca Records, where she recorded one of her most acclaimed albums Black Coffee (1956). While recording for Decca, Lee had hit singles with the songs "Lover" and "Mr. Wonderful."

Lee also acted in several films. In 1952, she played opposite Danny Thomas in a remake of the early Al Jolson film, The Jazz Singer. In 1955, she played a despondent, alcoholic blues singer in Pete Kelly's Blues (1955), for which she was nominated for an Oscar.

Peggy won a Grammy in 1969 as best contemporary female vocalist (for her recording of Is That All There Is?) and was awarded a Doctor of Music Honoris Causa degree from North Dakota State University, in 1975.

In the early 1990s, she retained famed entertainment attorney Neil Papiano, who, on her behalf, successfully sued Disney for royalties on Lady and the Tramp. Lee's lawsuit claimed that she was due royalties for video tapes, a technology that did not exist when she agreed to write and perform for Disney.

Never afraid to fight for what she believed in, Lee was passionate that musicians be equitably compensated for their work. Although she realized litigation had taken a toll on her health, Lee often quoted Ralph Waldo Emerson ("God's will will not be made manifest by cowards.")

She continued to perform into the 1990s, sometimes in a wheelchair, and still mesmerized audiences and critics alike.[citation needed]

In 1995 she was given the Grammy Lifetime Achievement Award.

After years of poor health, Lee died of complications from diabetes and heart attack at the age of 81. She is survived by Nicki Lee Foster, her daughter with Barbour. She is buried at the Westwood Village Memorial Park Cemetery in Westwood, California. On her marker in a garden setting is inscribed, "Music is my life's breath."