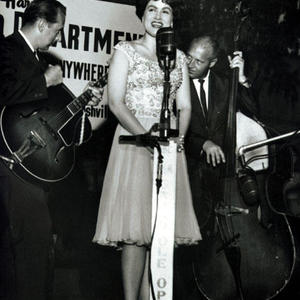 Virginia Patterson Hensley (born September 8, 1932 in Winchester, Virginia; died March 5, 1963 in Camden, Tennessee), better known as Patsy Cline, was a Grammy award winning American country music singer who, despite her short life, is known as one of the most influential and acclaimed female singers in the history of popular music. Cline was best known for her rich tone and emotionally expressive bold contralto voice, which along with her role as a mover and shaker in the country music industry, has been cited as an inspiration by many vocalists of various music genres.

Her hits included Walkin' After Midnight, I Fall to Pieces, She's Got You, Crazy and Sweet Dreams. Posthumously, millions of her albums have sold over the past 50 years. She has been given numerous awards, which have given her an iconic status with some fans similar to that of legends Johnny Cash and Elvis Presley. Ten years after her death, she became the first female solo artist inducted to the Country Music Hall of Fame.

Cline was the last name of her first husband, Gerald Cline, a construction industry mogul, whom she married in 1953 and divorced in 1957. That same year, Cline married Charles Allen Dick, who worked as a linotype operator for the Winchester Star. They had a daughter, Julia Dick (b. 1958), and a son, Allen Randolph Dick (b. 1961).

Cline rocketed to fame after she performed her breakthrough hit "Walkin' After Midnight" (1955) on the Arthur Godfrey's Talent Scouts, written by Don Hecht and Alan Block. She became a mainstay on the country music showcase Grand Ole Opry in 1960. Though she began her career recording rockabilly, it became clear that Cline's voice was best suited for pop/country crossover tunes, especially love songs. Some signature songs are "Crazy" (written by Willie Nelson but forever linked to Cline), "She's Got You", "I Fall to Pieces" and Don Gibson's "Sweet Dreams".

On June 14, 1961, Patsy Cline and her brother were involved in a head-on car collision. The impact of the accident threw Patsy through the windshield, nearly killing her. Suffering from a jagged cut across her forehead that required stitches, a broken wrist, and a dislocated hip, she spent a month in the hospital. When she left the hospital, her forehead was still visibly scarred.

Cline died in a plane crash at Camden, Tennessee while returning from Kansas City, Missouri at the age of 30, in 1963. Also killed in the crash were three other country music figures who were fairly well-known at the time, Hawkshaw Hawkins, Randy Hughes, and Cowboy Copas. Hughes, Cline's manager, was the plane's pilot. Country singer Jack Anglin died in an automobile accident while driving to her funeral.

Were she alive today, Patsy Cline would have four grandchildren and two great-grandchildren. After Cline's death, Charlie Dick married and divorced Jamey Ryan, also a singer, and had a son, Charles Allen Dick, Jr.

Cline is interred in the Shenandoah Memorial Park cemetery in her hometown of Winchester, Virginia.

Among her many honors, she has a star on the Hollywood Walk of Fame at 6160 Hollywood Blvd, she was elected to the Country Music Hall of Fame in 1973, in 1993 she was honored with her image on a United States postage stamp and in 1995, she was awarded posthumously a Grammy Lifetime Achievement Award.

The 1985 movie Sweet Dreams, starring Jessica Lange as Cline, is based on her adult life and is said by some familiar with her to be fairly accurate in many respects, although some have disputed its portrayal of her mercurial relationship with second husband Charlie Dick (portrayed in the film by Ed Harris). However, its depiction of the plane crash as occurring in high desert mountains totally unlike any terrain found in West Tennessee is wildly inaccurate. Another adaptation of her life is the one-woman musical, "A Closer Walk with Patsy Cline" which originated in Canada in the 1990s and originally starred Louise Vallance as Cline. "I Fall to Pieces" was voted #107 on the RIAA list of the Songs of the Century.

In 2005 her album "Patsy Cline's Greatest Hits" was certified by the RIAA as Diamond, meaning it had reached sales of 10 million copies.

In 1980 Patsy Cline was portrayed in the film Coal Miner's Daughter by actress Beverly D'Angelo. The film displayed the close friendship Cline had with fellow country music singer, Loretta Lynn. Despite the amount of songs by Patsy Cline used in the film, D'Angelo did all her own singing.