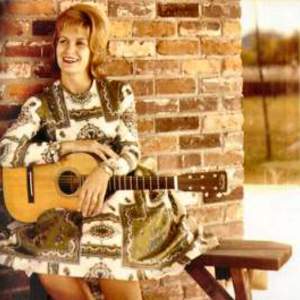 Mary Frances "Skeeter" Davis (December 30, 1931 ? September 19, 2004) was a country music singer and a member of the Grand Ole Opry radio show for more than 40 years. She was best known for her hit song "The End of the World" (1963), one of the most popular American records of the 1960's. One of the first women to achieve major stardom in the country music field as a solo vocalist, she was an acknowledged influence on Tammy Wynette and Dolly Parton.

Mary Frances Penick was born on December 30, 1931 in the small Appalachian town of Dry Ridge, Kentucky. As a child, her grandfather nicknamed her "Skeeter" because she was always active and buzzing around like a mosquito. She got her start in music as part of the duo, The Davis Sisters, along with childhood friend, Betty Jack Davis. Thus, Skeeter Davis was born to the rest of the world.

The Davis Sisters sang in the local Lexington, Kentucky area and appeared on local radio WLAX in 1949. From there, they earned radio and television appearances in Detroit, Cincinnati and Wheeling, WV, where they were part of the WWVA Wheeling Jamboree.

In 1952, Skeeter and Betty Jack recorded for Fortune, but won a recording contract with RCA the following year and achieved their first chart success. "I Forgot More Than You'll Ever Know" went to number one on the U.S. country chart and number eighteen on the U.S. pop chart.

Sadly, on August 23, 1953, Skeeter and Betty Jack were involved in a serious car accident in which Betty Jack died and Skeeter was critically injured. It took Skeeter more than a year to recover both physically and mentally. With great difficulty and a lot of persuasion, Skeeter returned to singing with Betty Jack's sister, Georgia Davis, to briefly resume the Davis Sisters' act. But, within a year, the duo broke up and Skeeter pursued a solo career.

She continued to record on the RCA label where she worked with Eddy Arnold and Elvis Presley. In 1955, she toured for RCA on the Caravan of the Stars. Davis teamed up with producer, Chet Atkins and scored her first solo country chart hit in 1958 with "Lost To A Geisha Girl." This was during a time when the female acts were surging forward with "response" songs to some of the biggest hits by male artists. As Kitty Wells had answered Hank Thompson's "Honky Tonk Angels," with "It Wasn't God Who Made Honky Tonk Angels" in 1952, Skeeter Davis put out this answer to Hank Locklin's "Geisha Girl."

A few years later, Davis recorded another answer to a Hank Locklin song and gained another huge hit. Locklin sang "Please Help Me I'm Falling" and Davis' response was, "I Can't Help You, I'm Falling Too."

In 1959, Davis achieved one of her greatest ambitions when she moved to Nashville and became a regular member of the Grand Ole Opry. In 1960, she married WSM personality, Ralph Emery, but the tumultuous marriage ended in 1964.

During the 1960's, Davis was one of RCA's most successful country artists. She harvested 26 U.S. country hits, 12 of which crossed over to the U.S. pop charts. Among these was what was to become her trademark song, the million-selling record "The End Of The World" which peaked at number two in both the U.S. country and pop charts in 1963. She also earned her only UK chart presence with "The End Of The World" which topped out at number eighteen in only thirteen weeks on the chart.

Davis has also acheived songwriting success. Her co-written song "Set Him Free" became her first country Top 10 hit in 1959. She also co-wrote "My Last Date" with Boudleaux Bryant and Floyd Cramer. Cramer, famed pianist and member of the original A-team, recorded it as an instrumental solo and had a million-selling record on it in 1960.

During the 60's and 70's, Davis toured extensively in the U.S., Canada, Europe and Far East. Her solo career started to wane in the 70's, but she still had several more hits such as "Bus Fare To Kentucky," "I'm A Lover, Not A Fighter," and "One Tin Soldier." Her duets with Bobby Bare, George Hamilton IV, and The Bee Gees gave her a few more hits, but by the mid-70's, Davis was reaching the end of her illustrious career. She ended her twenty-two year relationship with RCA in 1974 and charted her last hit for Mercury in 1976 with "I Love Us."

In 1967, Davis recorded a tribute album to Buddy Holly, which featured Waylon Jennings on the guitar. Later in 1972, she also did a tribute album to her friend, Dolly Parton. In 1985, she re-recorded an old Davis Sisters' hit, "May You Never Be Alone," with the group NRBQ. She married Joey Spampanito of NRBQ, but this marriage ultimately ended in divorce as well.

In 1973, Davis was dropped from the Grand Ole Opry's roster due to her strong criticisms of the Nashville Police Department during one of her performances. Her membership was later reinstated.

Davis has also taken to writing about her real life experiences. Her autobiography, "Bus Fare To Kentucky," was published in 1993. Davis pulls no punches in this brutally honest account of her life. She tells how she endured a family history of alcoholism, incest and murder. She also tells her side of the story regarding her four year marriage to Ralph Emery, following the heavy criticism which she received in Emery's autobiography. In 1997, she co-wrote a children's Christmas book, entitled "The Christmas Note," based on her own childhood.

Skeeter Davis passed away September 19th 2004 after a long battle with cancer.

I Can't Believe It's All Over (Vinyl)

Bring It On Home (Vinyl)

Love Takes A Lot Of My Time (Vinyl)