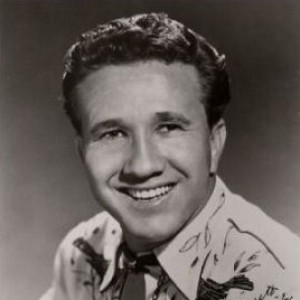 Martin David Robinson (born September 26, 1925 in Glendale, Arizona; died December 8, 1982 in Nashville, Tennessee), better known simply as Marty Robbins, was an American Grammy award winning country music singer, songwriter and multi-instrumentalist. One of the most popular and successful country and western singers of his era, for most of his nearly four-decade career, Robbins was rarely far from the country music charts, and several of his songs also became pop hits.

In addition to his recordings and performances, Robbins was an avid race car driver, competing in 35 career NASCAR races with six top 10 finishes.

Robbins served in the United States Navy as an LCT coxswain during World War II. To pass time, he learned to play the guitar, started writing songs, and grew to love Hawaiian music. After his discharge from the military in 1945, he started playing at local venues in Phoenix, then moved on to host his own radio station show on KTYL. He eventually hosted his own television (TV) show on KPHO in Phoenix and after Little Jimmy Dickens made a guest appearance on Robbins' TV show, he got Robbins a record deal with Columbia. Robbins went on to become an immensely popular singing star of the Grand Ole Opry in Nashville, Tennessee.

His musical accomplishments include the first Grammy Award ever awarded for a country song, for his 1959 hit and signature song "El Paso". "El Paso" was also the first song to hit #1 on the pop chart in the 1960s. It was taken from his album Gunfighter Ballads and Trail Songs. He won the Grammy Award for the Best Country & Western Recording 1961, for the follow-up album More Gunfighter Ballads and Trail Songs, and was awarded the Grammy Award for Best Country Song in 1970, for "My Woman, My Woman, My Wife." Robbins was named "Artist of the Decade" (1960-69) by the Academy of Country Music, was elected to the Country Music Hall of Fame in 1982, and was given a Grammy Hall of Fame Award in 1998 for his song "El Paso".

Marty Robbins was inducted into the Nashville Songwriters Hall of Fame in 1975. For his contribution to the recording industry, Marty Robbins has a star on the Hollywood Walk of Fame at 6666 Hollywood Blvd.

Between recording songs and touring, Marty Robbins was an avid race car driver, competing in NASCAR with the best stock car drivers in the world, including at the Daytona 500.

"El Paso" was a staple of live performances of the Grateful Dead for many years. It was first played in 1969, and subsequently performed more than 385 times until the group's disbandment in 1995.

His rendition of the song "Big Iron" is still played today on the hit game Fallout:New Vegas on the Mojave Music Radio